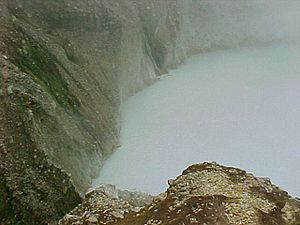 A boiling lake in Dominica

The boiling point of a substance is the temperature at which the substance boils, or enters a state of rapid evaporation. For pure water this is 100° Celsius or 212° Fahrenheit. This is measured at one atmosphere, that is, the air pressure at sea level

Boiling points can be changed in several ways. The addition of solutes or other substances usually changes the boiling point. Additionally, changing the pressure on a liquid changes its boiling point.

All content from Kiddle encyclopedia articles (including the article images and facts) can be freely used under Attribution-ShareAlike license, unless stated otherwise. Cite this article:
Boiling point Facts for Kids. Kiddle Encyclopedia.