Its peak is on the border of Nepal and China. It is above the Death Zone where the air is too thin for a human being to live, so usually compressed gas tanks with different gas mixes for different altitudes are used when climbing. The Death Zone refers to the parts of Mount Everest that are above 7,600 metres (24,900 ft) above sea level.

Two other mountains also can be named as the "highest" mountains - the Hawaiian volcano Mauna Loa on Hawaii island is the highest mountain measured from the base underwater to the summit (more than 11 kilometres), and the summit of Mount Chimborazo is the fixed point on Earth which is the greatest distance from the center. This is because of the shape of the Earth: the circumference around the Equator is greater than around the poles.

"Everest Base Camp" is used to mean the two base camps on opposite sides of Mount Everest. South Base Camp is in Nepal at an altitude of 5,364 metres (17,598 ft). North Base Camp is in Tibet at 5,150.00 meters (16,896.33 ft). These camps are simple campsite shelters at the bottom (or base) of the mountain. They are used by mountain climbers during their journey up or down the mountain. Supplies are provided there and climbers rest, heal and make trip preparations. 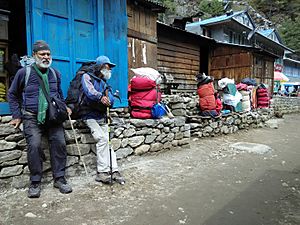 Supplies are shipped to the South Base Camp by Sherpas or porters, and with the help of animals, usually yaks. The North Base Camp has vehicle access (at least in the summer months). Climbers usually rest at base camp for several days for their bodies to get used to the thin air of high altitudes.

This reduces the risks and severity of altitude sickness.

Mount Everest has a very cold and snowy climate. Winds can speed up to 177 mph (285 km/h). The coldest month is January with a high of −74 °F (−59 °C) and the warmest month in mount everest is July with a high of −10 °F (−23 °C). Because of climate change, the glaciers around Mount Everest may disappear over the next few decades. 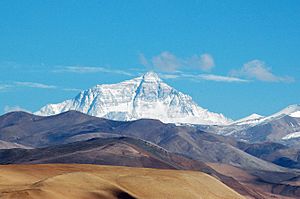 A survey of India in 1856 recorded Everest. It was called Peak XV. This first published height was 8,840 m (29,000 ft). Everest was given its official English name in 1865 by the Royal Geographical Society.

British people began exploring the area around Mount Everest in 1921. The first expedition to try to climb to the top of Everest was in 1922. On June 8th, 1924, George Leigh Mallory and climbing partner Andrew Irvine tried to climb to the summit of Mount Everest. They disappeared into the fog and were not seen again until Mallory's dead body was found by Conrad Anker in 1999.

The top of Mount Everest was first reached in May 1953 by the Sherpa Tenzing Norgay and the New Zealander Sir Edmund Hillary.

In March 2020, Nepal closed the mountain to climbing. This was part of the effort to stop the 2019–20 coronavirus pandemic.

Sherpas are the local people who live near the foot of Mount Everest. For the Sherpas, Mount Everest is a sacred mountain and before they climb Mount Everest they always do a sacrificial offering. 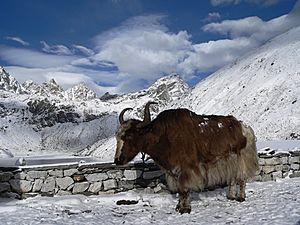 There is very little native flora or fauna on Everest. A moss grows at 6,480 metres (21,260 ft) on Mount Everest. It may be the highest altitude plant species. An alpine cushion plant called Arenaria is known to grow below 5,500 metres (18,000 ft) in the region.

Jumping spider has been found at elevations as high as 6,700 metres (22,000 ft), possibly making it the highest confirmed non-microscopic permanent resident on Earth. It lurks in crevices and may feed on frozen insects that have been blown there by the wind. There is a high likelihood of microscopic life at even higher altitudes.

Yaks are often used to haul gear for Mount Everest climbs. They can haul 100 kg (220 pounds), have thick fur and large lungs. One common piece of advice for those in the Everest region is to be on the higher ground when around yaks and other animals, as they can knock people off the mountain if standing on the downhill edge of a trail. Other animals in the region include the Himalayan tahr which is sometimes eaten by the snow leopard. The Himalayan black bear can be found up to about 4,300 metres (14,000 ft) and the red panda is also present in the region. One expedition found a surprising range of species in the region including a pika and ten new species of ants.

All content from Kiddle encyclopedia articles (including the article images and facts) can be freely used under Attribution-ShareAlike license, unless stated otherwise. Cite this article:
Mount Everest Facts for Kids. Kiddle Encyclopedia.