The Himalayan black bear (Ursus thibetanus laniger) is a subspecies of the Asian black bear found in the Himalayas of India, Bhutan, Nepal, China and Pakistan. 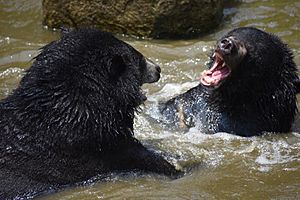 Bears playing or fighting in the water

They are omnivorous creatures and will eat just about anything. Their diet consists of acorns, nuts, fruit, honey, roots, and various insects such as termites and beetle larvae. If food is scarce, they may turn to eating livestock such as sheep, goats, and cattle.

They reach sexual maturity at approximately three years. Mating occurs in October with usually two cubs born in February, while the mother is still hibernating. The offspring usually stay with their mother into the second year.

This subspecies is listed as 'vulnerable' due to encroachment of human population, forest fires and the timber industries; these have all reduced the bear's habitat. There is also a high mortality rate among the newborn. And even though hunting of the black bear has been forbidden since 1977, there is still a large problem with poaching.

All content from Kiddle encyclopedia articles (including the article images and facts) can be freely used under Attribution-ShareAlike license, unless stated otherwise. Cite this article:
Himalayan black bear Facts for Kids. Kiddle Encyclopedia.