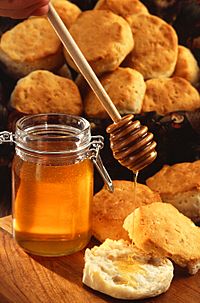 Honey is a food made by honeybees from nectar. Then they put the honey into a honeycomb, which for them is a storage unit. Honey is sweet and can be used instead of sugar. It is a supersaturated liquid. As the temperature drops, glucose comes out of solution. Then it is a semi-solid rather than a liquid.

Honey is first mentioned in the Book of Exodus, and is often linked with pleasant and comfortable things. "Land of Milk and honey". It is also referenced in the Qur'an, with similar associations to good and evil.

Much like wine, there are several kinds of honey with different tastes, colors and textures. Some common types are got from bees who use the clover flower's pollen. It is thick and has a medium color. It tends to form crystals or grains more quickly when exposed to air. Acacia flowers make another common variety.

Honey from bees using flowers from oleanders, rhododendrons, some laurels, and azaleas may cause honey intoxication. Symptoms include dizziness, weakness, sweating, nausea, and vomiting.

Expert beekeepers solve this problem by moving their hives to areas where the right flowers are available. Bees like to get their nectar locally, and do not go more than two miles from the hive.

Honey tastes quite different according to which flowers were used by the bees. Key things are its fragrance (smell), taste and how clear it is; also the absence of bad qualities. 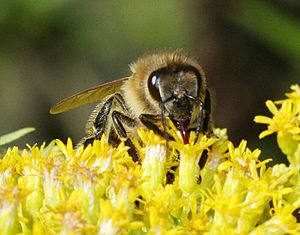 A honey bee on calyx of goldenrod

Honey is produced by bees collecting nectar for use as sugars consumed to support metabolism of muscle activity during foraging or to be stored as a long-term food supply. During foraging, bees access part of the nectar collected to support metabolic activity of flight muscles, with the majority of collected nectar destined for regurgitation, digestion, and storage as honey. In cold weather or when other food sources are scarce, adult and larval bees use stored honey as food.

By contriving for bee swarms to nest in human-made hives, people have been able to semidomesticate the insects and harvest excess honey. In the hive or in a wild nest, the three types of bees are: 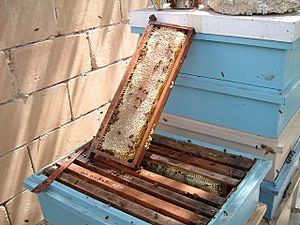 Leaving the hive, a foraging bee collects sugar-rich flower nectar, sucking it through its proboscis and placing it in its proventriculus (honey stomach or crop), which lies just fore of its food stomach. The honey stomach holds ~ 40 mg of nectar, or approximately 50% of the bee's unloaded weight, which can require over a thousand flowers and more than an hour to fill. The nectar generally begins with a water content of 70--80%. Salivary enzymes and proteins from the bee's hypopharyngeal gland is added to the nectar to begin breaking down the sugars, raising the water content slightly. The forager bees then return to the hive where they regurgitate and transfer nectar to the hive bees. The hive bees then use their honey stomachs to ingest and regurgitate the nectar, forming bubbles between their mandibles, repeatedly until it is partially digested. The bubbles create a large surface area per volume and a portion of the water is removed through evaporation. Bee digestive enzymes – invertase, amylase, and diastase – hydrolyze sucrose to a mixture of glucose and fructose. The bees work together as a group with the regurgitation and digestion for as long as 20 minutes, passing the nectar from one bee to the next, until the product reaches the honeycombs in storage quality. It is then placed in honeycomb cells and left unsealed while still high in water content (about 50--70%). As a result, natural yeasts, which unchecked, would cause the sugars in the newly formed honey to ferment. Bees are one of the few insects that generate body heat, thus the hive bees constantly regulate the hive temperature, either heating with their bodies or cooling with water evaporation, to maintain a fairly constant temperature in the honey-storage areas of ~ 35 °C (95 °F). The process continues as hive bees flutter their wings constantly to circulate air and evaporate water from the honey to a content around 18%, raising the sugar concentration beyond the saturation point and preventing fermentation. The bees then cap the cells with wax to seal them. As removed from the hive by a beekeeper, honey has a long shelf life and will not ferment if properly sealed.

Another source of honey is from a number of wasp species, such as the wasps Brachygastra lecheguana and Brachygastra mellifica, which are found in South and Central America. These species are known to feed on nectar and produce honey.

Some wasps, such as the Polistes versicolor, even consume honey themselves, alternating between feeding on pollen in the middle of their lifecycles and feeding on honey, which can better provide for their energy needs. 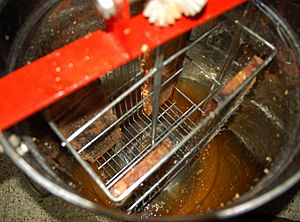 Extraction from a honeycomb 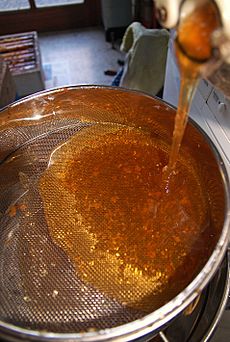 Filtering from a honeycomb

Honey is collected from wild bee colonies or from domesticated beehives. The honey is stored in honeycombs. Wild bee nests are sometimes located by following a honeyguide bird. The bees may first be pacified by using smoke from a bee smoker. The smoke triggers a feeding instinct (an attempt to save the resources of the hive from a possible fire), making them less aggressive and the smoke obscures the pheromones the bees use to communicate.

The honeycomb is removed from the hive and the honey may be extracted from that, either by crushing or by using a honey extractor. The honey is then usually filtered to remove beeswax and other debris.

Before the invention of removable frames, bee colonies were often sacrificed to conduct the harvest. The harvester would take all the available honey and replace the entire colony the next spring. Since the invention of removable frames, the principles of husbandry lead most beekeepers to ensure that their bees have enough stores to survive the winter, either by leaving some honey in the beehive or by providing the colony with a honey substitute such as sugar water or crystalline sugar (often in the form of a "candyboard"). The amount of food necessary to survive the winter depends on the variety of bees and on the length and severity of local winters.

A wide range of species other than humans are attracted to wild or domestic sources of honey.

Because of its unique composition and chemical properties, honey is suitable for long-term storage, and is easily assimilated even after long preservation. Honey, and objects immersed in honey, have been preserved for centuries. The key to preservation is limiting access to humidity. In its cured state, honey has a sufficiently high sugar content to inhibit fermentation. If exposed to moist air, its hydrophilic properties pull moisture into the honey, eventually diluting it to the point that fermentation can begin.

Long shelf life of honey is attributed to an enzyme found in the stomach of bees. The bees mix Glucose oxidase with expelled nectar they previously consumed, which then creates two by-products: gluconic acid and hydrogen peroxide, responsible for honey's acidity and ability to suppress bacterial growth.

Adulteration of honey is the addition of other sugars, syrups, or compounds into honey to change its flavor or viscosity, make it cheaper to produce, or increase the fructose content to stave off crystallization. According to the Codex Alimentarius of the United Nations, any product labeled as honey or pure honey must be a wholly natural product, although different nations have their own laws concerning labeling. Adulteration of honey is sometimes used as a method of deception when buyers are led to believe that the honey is pure. The practice was common dating back to ancient times, when honey was sometimes blended with plant syrups like maple, birch, or sorghum and sold to unsuspecting customers. Sometimes crystallized honey was mixed with flour or other fillers, hiding the adulteration from buyers until the honey was liquefied. In modern times, the most common adulteration-ingredient became clear, almost-flavorless corn syrup, which, when mixed with honey, is often very difficult to distinguish from unadulterated honey.

Isotope ratio mass spectrometry can be used to detect addition of corn syrup and cane sugar by the carbon isotopic signature. Addition of sugars originating from corn or sugar cane (C4 plants, unlike the plants used by bees, and also sugar beet, which are predominantly C3 plants) skews the isotopic ratio of sugars present in honey, but does not influence the isotopic ratio of proteins. In an unadulterated honey, the carbon isotopic ratios of sugars and proteins should match. Levels as low as 7% of addition can be detected.

In the United States, according to the National Honey Board (a USDA-overseen organization), "honey stipulates a pure product that does not allow for the addition of any other substance... this includes, but is not limited to, water or other sweeteners".

All content from Kiddle encyclopedia articles (including the article images and facts) can be freely used under Attribution-ShareAlike license, unless stated otherwise. Cite this article:
Honey Facts for Kids. Kiddle Encyclopedia.