Goldenrods are any of the about 150 species of weedy herbs that make up the genus Solidago. Handling the goldenrod many times can make some people have allergies. Because of this, some florists change their jobs. Parts of goldenrods are eaten by humans. They are also eaten by many species of Lepidoptera.

About 100 perennial species make up the genus Solidago, most being found in the meadows and pastures, along roads, ditches and waste areas in North America. There are a handful of species from each of Mexico, South America, and Eurasia. Some American species have also been introduced into Europe some 250 years ago.

Many species are difficult to distinguish. Probably due to their bright, golden yellow flower heads blooming in late summer, the goldenrod is often unfairly blamed for causing hay fever in humans. The pollen causing these allergy problems is mainly produced by Ragweed (Ambrosia sp.), blooming at the same time as the goldenrod, but is wind-pollinated. Goldenrod pollen is too heavy and sticky to be blown far from the flowers, and is thus mainly pollinated by insects.

Goldenrods are easily recognized by their golden inflorescence with hundreds of small capitula, but some are spike-like and other have auxiliary racemes.

They have slender stems, usually hairless but S. canadensis shows hairs on the upper stem. They can grow to a length between 60 cm and 1.5 m.

Goldenrod is used as a food plant by the larvae of some Lepidoptera species. The Goldenrod then forms a leathery bulb (called a gall) around the invading insect as a quarantine to keep it confined to a small part of the plant. Parasitoid wasps have learned to find these galls, and lay eggs in the insect after penetrating the bulb. Woodpeckers have learned to blast open the gall and eat the wasp-infested insect holed up in the center.

Goldenrods can be used for decoration and making tea. Goldenrods are, in some places, held as a sign of good luck or good fortune; but they are considered weeds by some.

Goldenrods are mostly short-day plants and bloom in late summer and early fall and some species produce abundant nectar when moisture is plentiful before bloom, and the bloom period is relatively warm and sunny. Honey from goldenrods often is dark and strong due to admixtures of other nectars. However when there is a strong honey flow, a light (often water white), spicy-tasting honey is produced. While the bees are ripening the honey there is a rank odor and taste, but finished honey is much milder.

British gardeners adopted goldenrod long before Americans. Goldenrod only began to gain some acceptance in American gardening (other than wildflower gardening) during the 1980s. A hybrid with aster, known as x Solidaster is less unruly, with pale yellow flowers, equally suitable for dried arrangements.

Solidago canadensis was introduced as a garden plant in Central Europe, and is now common in the wild. In Germany, it is considered an invasive species that displaces native vegetation from its natural habitat.

Goldenrod is a companion plant, playing host to some beneficial insects, repelling some pests 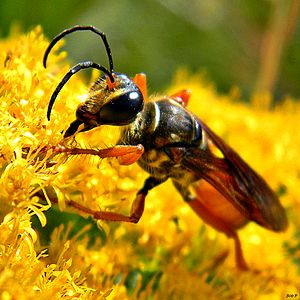 Inventor Thomas Edison experimented with goldenrod to produce rubber, which it contains naturally. Edison created a fertilization and cultivation process to maximize the rubber content in each plant. His experiments produced a 12 foot tall plant that yielded as much as 12 percent rubber. The rubber produced through Edison's process was resilient and long lasting. The tires on the Model T given to him by his friend Henry Ford were made from goldenrod. Examples of the rubber can still be found in his laboratory, elastic and rot free after more than 50 years. However, even though Edison turned his research over to the U.S. government a year before his death, goldenrod rubber never went beyond the experimental stage.

The variety Solidago virgaurea is a traditional kidney tonic. It has aquaretic, anti-inflammatory, antispasmodic and antiseptic action and seems to increase kidney output. This makes it useful as an agent to counter inflammation and irritation of the kidneys when bacterial infection or stones are present. Such use is in combination with other herbs that create a synergistic therapeutic effect on the urinary system. As in other areas of herbalism, blending creates a therapy greater than the effect of a single herb alone. The aquaretic action is also useful in helping to dissolve kidney stones by diluting their components and preventing them from reoccuring. See herbal medicine. Goldenrod has also been used as part of a tincture to aid in cleansing of the kidney/bladder during a healing fast, in conjunction with Potassium broth and specific juices. 'Solidago odora' is also sold as a medicinal, for these issues: mucus, kidney/bladder cleansing and stones, colds, digestion.

The goldenrod is the state flower of the U.S. states of Kentucky (adopted March 16, 1926) and Nebraska (adopted April 4, 1895). It used to be the state flower of Alabama, being adopted as such on September 6, 1927, but was later rejected in favour of the camellia. Goldenrod was recently named the state wildflower for South Carolina.

In Midwestern states in the mid-twentieth century it was said that when the goldenrod bloomed, it would soon be time to go back to school--the blossoms appeared in mid- to late August, shortly before the traditional start of school on the day after Labor Day.

All content from Kiddle encyclopedia articles (including the article images and facts) can be freely used under Attribution-ShareAlike license, unless stated otherwise. Cite this article:
Goldenrod Facts for Kids. Kiddle Encyclopedia.