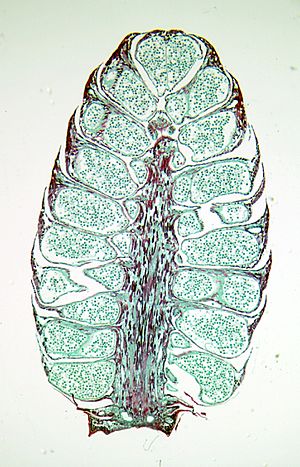 Cross section of a male cone of a pine tree. The scales of the cone support microsporangia, which produce a large number of pollen grains

Pollen is a powder made of pollen grains, which produce sperm cells (male cells used for reproduction) of seed plants. The pollen grains are actually haploid male gametophytes.

The pollen is released by the opening of the anther. The pollen is carried by some agent (wind, or some animal) to the receptive surface of the carpel of the same or another flower. This process is known as pollination. After successful pollination, the pollen grain (immature microgametophyte) completes its development by growing a pollen tube and undergoing mitosis to produce two male gametes.

There are two main kinds of pollination. One kind happens when pollen from a stamen sticks to the pistil of the same plant. That is self-pollination. 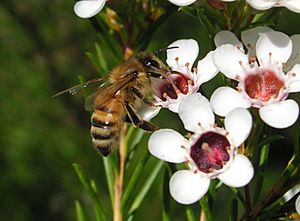 Animals also help move pollen between plants. Many flowers are colourful and their scent attracts some animals. These flowers also make a sweet juice called nectar. Sometimes an animal, such as a bee, sees or smells a flower. Then, it lands on the flower to get nectar. As the bee drinks the nectar, the stamens brush pollen onto its body. Then, the bee flies to another flower that has a pistil. The pollen on the bee's body brushes onto the sticky top of the flower's pistil. The pollen is used as protein for the bee larvae.

The plants help feed the animal. In return, the animal helps the plants by moving pollen from flower to flower. The relationship has evolved together; it is a kind of co-evolution called mutualism or symbiosis. 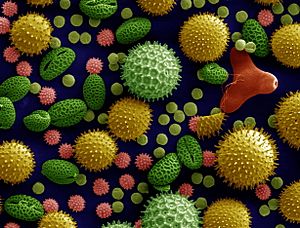 Nasal allergy to pollen is called pollinosis, and allergy specifically to grass pollen is called hay fever. Generally, pollens that cause allergies are those of anemophilous plants (pollen is dispersed by air currents.) Such plants produce large quantities of lightweight pollen (because wind dispersal is random and the likelihood of one pollen grain landing on another flower is small), which can be carried for great distances and are easily inhaled, bringing it into contact with the sensitive nasal passages.

Pollen allergies are common in polar and temperate climate zones, where production of pollen is seasonal. In the tropics pollen production varies less by the season, and allergic reactions less. In northern Europe, common pollens for allergies are those of birch and alder, and in late summer wormwood and different forms of hay. Grass pollen is also associated with asthma exacerbations in some people, a phenomenon termed thunderstorm asthma.

In Denmark, decades of rising temperatures cause pollen to appear earlier and in greater numbers, as well as introduction of new species such as ragweed.

The most efficient way to handle a pollen allergy is by preventing contact with the material. Individuals carrying the ailment may at first believe that they have a simple summer cold, but hay fever becomes more evident when the apparent cold does not disappear. The confirmation of hay fever can be obtained after examination by a general physician.

All content from Kiddle encyclopedia articles (including the article images and facts) can be freely used under Attribution-ShareAlike license, unless stated otherwise. Cite this article:
Pollen Facts for Kids. Kiddle Encyclopedia.