Beetles, the order Coleoptera, are the largest group of insects. There are 350,000 different species of beetles which have been named: about 40% of all known insects. There are an estimated 800,000 to a million living species. Beetles live almost everywhere, though not in the ocean or in places that are very cold, such as Antarctica.

Beetles went through a massive adaptive radiation early in their evolutionary history. The evolution of flowering plants helped drive the diversification of beetles. Four of the six biggest families of beetles mainly eat flowering plants. 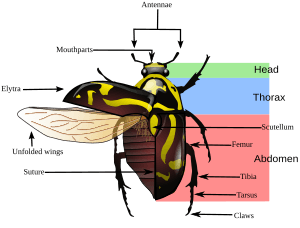 Parts of a beetle

In common with other insects, there are three main parts to a beetle's body: the head, the thorax (the middle part), and the abdomen (the back part). On the head, beetles have antennae (feelers), eyes, and a mouth. The legs and wings of the beetle are attached to the thorax. The abdomen of a beetle does not usually have special parts on the outside, but it has the beetle’s gut inside. Like other insects, beetles have no internal bones, but instead have a hard exoskeleton on the outside of the body. The exoskeleton is made of hard plates of chitin. 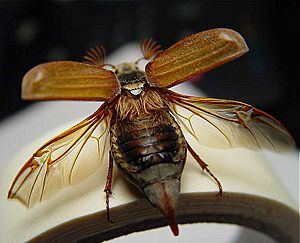 The back wings of a beetle are see-through. This beetle uses its back wings to fly. The hard front wings are lifted up. 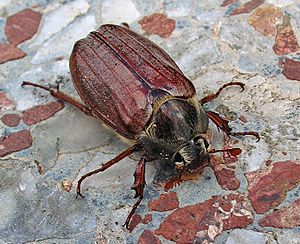 The hard front wings of the beetle hide the back wings.

Beetles differ from other flying insects because their front wings have evolved into hard covers, or elytra. The back wings are used for flying. They are thin and are kept under the elytra when at rest. Beetles lift their elytra out of the way in order to fly. A few species of true bugs have a similar arrangement.

Not all beetles can fly. Some beetles do not have back wings, and some cannot lift their front wings out of the way. A few beetles have no wings at all. Some beetles with no wings look like larvae, and are called "larviform". An example is the family Phengodidae, glow-worms where the females are larviform throughout their lives.

The legs of beetles help them to walk, run, swim, and dig. All beetles have six legs that is made out of several parts. Each leg ends in two to five small segments called tarsi. The last tarsus (the singular of tarsi) of each beetle “foot” has one or two claws on the end of it. Most beetles use their legs to walk or run. Some beetle legs are flat and have long hairs on them. These kinds of legs are found on water beetles. Beetles that often dig in soil have flat legs with spines or horns at the edges. Flat legs with horns are called fossorial legs. A few beetles have large hind legs, similar to those of grasshoppers, which help the beetle to jump. Flea beetles are an example of jumping beetle. 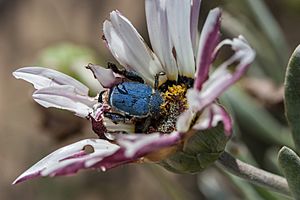 Beetle burrowing in the disc of a flower while feeding. South Africa

Beetles have compound eyes, which means the two big shiny eyes on the head are actually made out of many smaller parts. Sometimes the two eyes are each divided in half so that it looks like there are four eyes. One beetle family, the whirligig beetles, has divided eyes so that when they are swimming they can see on top of the water and under the water at the same time. A few beetles have extra simple eyes (usually two) called ocelli. The ocelli are on the top of the beetle’s head.

The mouth of a beetle is very different from the mouth of a person. Most beetles have two hard mandibles at the front of their mouth which are a bit like teeth. Mandibles help the beetle eat by crushing and cutting food. In some beetles, the mandibles look like big pincers. Beetles also have four “fingers” around their mouth that push food into the mouth of the beetle. These fingers are called palpi.

Beetles do not breathe; instead they have holes called spiracles in the sides of their bodies which lead to trachea, which act like lungs. Beetles do not have blood, but they have something like blood, called haemolymph. It is a green colour. That's because their haemoglobin molecule has a copper atom at its centre, whereas ours has an iron atom there. 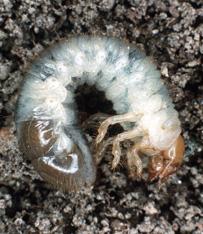 An example of a scarabaeiform larva

Beetles start out as eggs that a female beetle lays. Some beetles can lay thousands of eggs during their lives. A larva comes out when an egg hatches. Most beetle larvae do not look like adult beetles. A beetle larva eats and grows larger until it changes and becomes a pupa. When the pupa opens, an adult beetle, sometimes called an imago, comes out. This way of growing up is called complete metamorphosis.

Beetles eat many different things including living plants, rotting plants, animals that may be dead or alive, and animal faeces. Some beetles can eat both plants and animals, while others eat just one type of food. Beetles that can only eat one kind of thing are said to be host specific. Many leaf beetles and longhorn beetles are host specific.

Beetles are tough animals for their size. They are mechanically tough (the elytra), and have a variety of strategies to avoid being attacked by predators or parasitoids. These include camouflage, mimicry, toxicity, and active defence.

Beetles have a wide range of chemical defences, mostly got from plants their larvae eat. These chemicals make them taste bad when predators eat them. Blister beetles are so poisonous that if a horse eats only a few of them, the horse may die. Bombardier beetles squirt hot poisonous liquid at attackers. Lady beetles put out a cyanide compound when molested. Lady beetles also have colours that warn predators that they taste bad. Insects which taste foul use warning colours which birds learn to avoid. Also, other species which are tasty copy those warning colours. This is a type of mimicry, and is quite common in insects.

Very large beetles sometimes fight predators. Beetles that fight will often use their mandibles to injure their predators.

Beetles have sexual reproduction, and almost all go through complete metamorphosis. Some beetles have complex behavior to get a mate. Pheromones are used, and different species use different pheromones. Before reproduction, some male beetles sometimes fight to claim a female. This especially happens with stag beetles: males will fight using their long mandibles. More often, male and female beetle go through a long routine before mating. The details differ in each species – and that is the point. It is essential that mating takes place between beetles of the same species.

Some beetles give special care to their eggs or larvae. Some scarab beetles, called dung beetles, roll balls of dung (faeces) and put them in a hole in the ground. The female lays her eggs in the dung. When the eggs hatch, the larvae will eat the dung that their mother supplied for them.

In 2009, a fossil beetle was found in the Pennsylvanian of Mazon Creek, Illinois. This put the origin of the beetles back to 318 to 299 mya. Fossils from this time have been found in Asia and Europe, for instance in the red slate fossil beds of Niedermoschel near Mainz, Germany. Other fossils have been found in Obora, Czech Republic and Tshekarda in the Ural Mountains, Russia. The first discoveries from North America in Oklahoma were published in 2005 and 2008.

After the Permian–Triassic extinction event, the fossil record of insects is poor, but there are some beetles from the Lower Triassic. At the Babiy Kamen site in the Kuznetsk Basin, there are many beetle fossils, including entire specimens of the infraorders Archostemata (e.g. Ademosynidae, Schizocoleidae), Adephaga (e.g., Triaplidae, Trachypachidae) and Polyphaga (e.g. Hydrophilidae, Byrrhidae, Elateroidea).

During the Jurassic (210 to 145 mya), there was a dramatic increase in the number of beetle families, including the development and growth of carnivorous and herbivorous species. Dung beetles, and herbivorous beetles living on conifers, were common in the Jurassic period. The evolution of flowering plants in the Cretaceous led to the vast numbers of beetle species there are today. 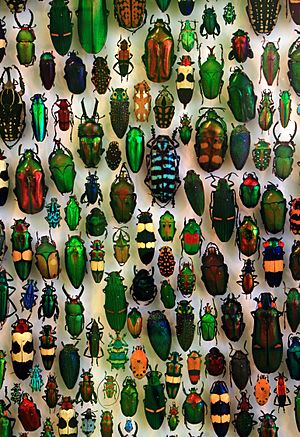 There are four living suborders of beetles: 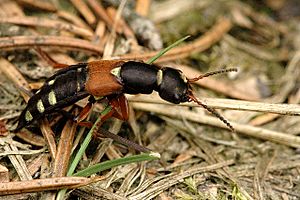 Rove beetles have short front wings (the red parts in this beetle's back) that do not cover their abdomen.

Different kinds of beetles can be divided into groups called families. There are many beetle families. The biggest families are listed here.

Popular names are often misleading; that is why biologists use scientific names in Latin. People call some beetles by other names. Fireflies (also called lightning bugs) are actually beetles; so are ladybirds or ladybugs, which biologists call lady beetles.

Some beetles cause trouble for farmers and people in forests because they eat crops or trees. These beetles are called pests. One beetle that hurts crops is the Colorado beetle; another is the Maize weevil. One that destroys trees is the Emerald ash borer.

All content from Kiddle encyclopedia articles (including the article images and facts) can be freely used under Attribution-ShareAlike license, unless stated otherwise. Cite this article:
Beetle Facts for Kids. Kiddle Encyclopedia.