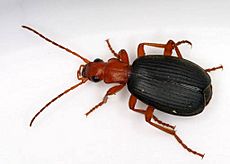 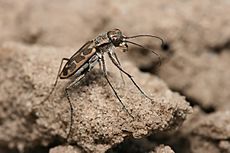 Ground beetles are the Carabidae, a large, cosmopolitan family of beetles. There are more than 40,000 species worldwide, about 2,000 of which are found in North America and 2,700 in Europe. There are a large number of subfaamilies.

Although their body shapes and colouring vary, most are shiny black or metallic. They have ridged wing covers (elytra). The elytra are fused in some large flightless species.

Almost all carabids have a groove on their foreleg with a comb of hairs used to clean their antennae.

Ground beetles often live under the bark of trees, under logs, or among rocks or sand by the edge of ponds and rivers.

Most species are carnivorous and actively hunt for any invertebrate prey they can overpower. Some run fast to catch their prey; tiger beetles (Cicindelinae) are certainly fast runners in comparison to their length. Unlike most Carabidae, which are nocturnal, the tiger beetles are active daytime hunters and often brightly coloured. They have large eyes and hunt by sight. Ground beetles of the species Promecognathus laevissimus are specialised predators of the cyanide millipede Harpaphe haydeniana. They can counter the hydrogen cyanide which makes these millipedes poisonous to most carnivores.

They defend themselves with noxious secretions. This is typical for the ancient beetle suborder Adephaga to which they belong. They have paired glands in the lower back of the abdomen. These are well developed, and produce noxious or even caustic secretions used to deter would-be predators.

The Anthiini can squirt their defensive secretions for considerable distances and are able to aim with a startling degree of accuracy.

As predators of invertebrates, including many pests, most ground beetles are considered beneficial organisms. The caterpillar hunters (Calosoma) are famous for their habit of devouring prey in quantity, eagerly feeding on tussock moth (Lymantriidae) caterpillars, processionary caterpillars (Thaumetopoeidae) and woolly worms (Arctiidae), which due to their urticating hairs are avoided by most insectivores. Large numbers of the forest caterpillar hunter (C. sycophanta), native to Europe, were shipped to New England for biological control of the gypsy moth (Lymantria dispar) as early as 1905.

A few species are nuisance pests. Zabrus is one of the few herbivorous ground beetle genera, and on rare occasions Zabrus tenebrioides, for example, occurs abundantly enough to cause some damage to grain crops. Large species, usually Carabinae, can become a nuisance if present in numbers, particularly during outdoor activities such as camping; they void their defensive secretions when threatened, and in hiding among provisions their presence may spoil food. Since ground beetles are generally reluctant or even unable to fly, mechanically blocking their potential routes of entry is usually easy. The use of insecticides specifically for Carabid intrusion may lead to unfortunate side effects, such as the release of their repugnatorial secretions, so it generally is not a good idea unless the same applications are intended to exclude ants, parasites or other crawling pests.

All content from Kiddle encyclopedia articles (including the article images and facts) can be freely used under Attribution-ShareAlike license, unless stated otherwise. Cite this article:
Ground beetle Facts for Kids. Kiddle Encyclopedia.