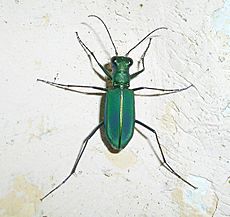 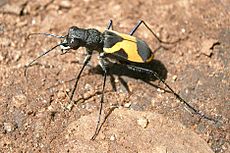 Cicindela aurofasciata from India, showing the large eyes and mandibles

The tiger beetles are a large group of beetles in the family Carabidae. About 2,600 species and subspecies are known, with the richest diversity in the Oriental (Indo-Malayan) region, followed by the Neotropics.

All tiger beetles are predators. They are known for their aggressive predatory habits and running speed. The fastest species of tiger beetle can run at a speed of 9 km/h (5.6 mph), which, relative to its body length, is about 22 times the speed of an Olympic sprinter, the equivalent of a human running at 480 miles per hour (770 km/h).

Tiger beetles live everywhere in the world except the Antarctic and Tasmania. They have powerful jaws, called mandibles, which they use to hold and crush their prey. They have long legs, big eyes, and a wide head. All are colourful. Their elytra are usually bright and have bold markings.

All content from Kiddle encyclopedia articles (including the article images and facts) can be freely used under Attribution-ShareAlike license, unless stated otherwise. Cite this article:
Tiger beetle Facts for Kids. Kiddle Encyclopedia.