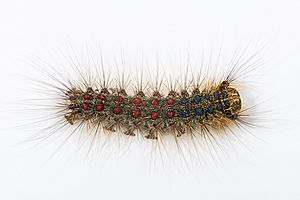 Lymantria dispar, the gypsy moth, is a species of moth in the Erebidae family. Lymantria dispar is subdivided into several subspecies, with subspecies such as L. d. dispar and L. d. japonica being clearly identifiable without ambiguity. Lymantria dispar has been introduced to several continents and is now found in Europe, Africa, Asia, North America and South America. The polyphagous larvae live on a variety of deciduous and coniferous trees and can cause severe damage in years of mass reproduction. Due to these features, the gypsy moth is listed among the world's 100 most invasive alien species.

The European gypsy moth (Lymantria dispar dispar) is native to temperate forests in western Europe. It had been introduced to the United States in 1869, and to Canada in 1912.

The Asian gypsy moth (Lymantria dispar asiatica) is native to temperate Asia east of the Ural mountains. Since the early 1990s it has also been detected along the West Coast of temperate North America. From southern Europe it is spreading northwards into Germany and other countries, where it hybridizes with the European gypsy moth, L. d. dispar. A colony had been reported from Great Britain in 1995.

In North America, the parasitoid chalcid wasp Ooencyrtus kuvanae was introduced as a biological control agent against the gypsy moth. The egg-parasitizing wasp is, however, not strictly host specific, as it also parasitizes the eggs of other Lepidoptera species.

Moths of the subfamily Lymantriinae are commonly called tussock moths due to the tussock-like tufts of hair on the caterpillars.

The name Lymantria dispar is composed of two Latin-derived words. The generic name Lymantria means 'destroyer'. The species epithet dispar means 'to separate' in Latin; it refers to the sexual dimorphism observed in the male and female imagines.

The North American gypsy moth and the European gypsy moth are considered to be the same subspecies, usually referred to as Lymantria dispar dispar. Confusion over the classification of species and subspecies still remains. The U. S. Department of Agriculture defines the Asian gypsy moth as "any biotype of L. dispar possessing female flight capability", despite L. d. asiatica not being the only accepted subspecies that is capable of flight. Traditionally, L. dispar has been referred to as "gypsy moth" even when referring to Japanese, Indian and Asiatic gypsy moth populations.

All content from Kiddle encyclopedia articles (including the article images and facts) can be freely used under Attribution-ShareAlike license, unless stated otherwise. Cite this article:
Gypsy moth Facts for Kids. Kiddle Encyclopedia.