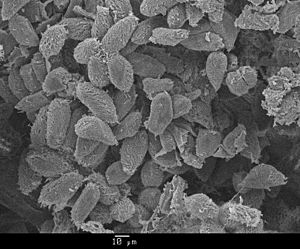 SEM image of endoparasitoid ciliates of the genus Collinia, which can cause mass mortality in affected krill populations

Parasitoids are parasites whose larvae develop inside another organism's body. This usually results in the death of the host, which sets them apart from 'traditional' parasites. There are twelve superfamilies of parasitic wasps which are entirely or mainly parasitoid. The largest family are the ichneumons, with over 80,000 species.

In parasitoids the adult stage is free-living: it finds the 'host' for the next generation. Their mother places them, as eggs, on or in the body of a 'host', which provides food for their growth. Normal parasites use vectors as their main means of getting to other hosts.

In Hymenoptera, there are many variations, and the distinction between the 'parasitic' and the 'traditional' hymenoptera can run very thin. In Britain there are about 6500 species of Hymenoptera – more than in any other insect order – and just one of the parasitoid superfamilies, Ichneumonoidea, contains nearly half of them. Most workers now recognise only two families in Ichneumonoidea. These are Ichneumonidae, with over two thousand British species, and Braconidae, with nearly 1200 representatives in Britain. They are, respectively, the largest and the second largest families of British insects. Only a beetle family, the Staphylinidae, is near the thousand mark. Ichneumonoids also include the largest parasitoids. 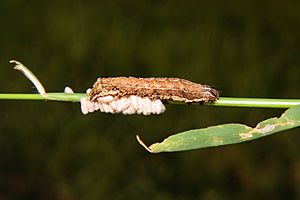 Hymenopteran parasitoids often have unique life cycles. In one family, the Trigonalidae, the female wasps deposit eggs into small pockets they cut into the edge of leaves with their ovipositor. A caterpillar chewing these leaves may swallow some of the eggs. When they get into the caterpillar's gut, they hatch and burrow through the gut wall and into the body cavity. Later they search the caterpillar's body cavity for other parasitoid larvae, and it is these they attack and feed on. Some trigonalids, once in a caterpillar or sawfly larva, need their host to fall prey to a social wasp. The wasp carries the caterpillar back to its nest, and there it is butchered and fed to the wasp's young. The young serve as host for the trigonalid, the eggs of which are in the butchered caterpillar.

About 10% of described insects are parasitoids, in the orders Hymenoptera, Diptera, Coleoptera, Neuroptera, Lepidoptera, Strepsiptera, and Trichoptera. The majority are wasps within the Hymenoptera; most of the others are Dipteran flies.

The approximate number (estimates can vary widely) of parasitoid species out of the total is shown in square brackets, e.g. [2,500 of 400,000].

All content from Kiddle encyclopedia articles (including the article images and facts) can be freely used under Attribution-ShareAlike license, unless stated otherwise. Cite this article:
Parasitoid Facts for Kids. Kiddle Encyclopedia.