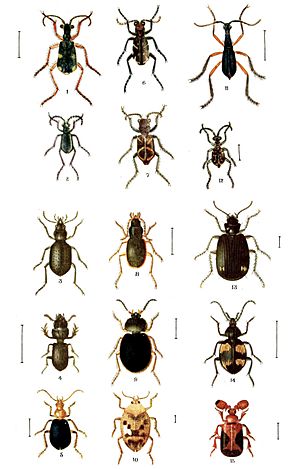 The Adephaga is a suborder of beetles. There are more than 40,000 recorded species in ten families. This is the second largest suborder of the order Coleoptera.

The beetles of this suborder include ground beetles, tiger beetles, diving beetles, and whirligig beetles. Most of the species belong to the family of carabids, or ground beetles (Carabidae).

All content from Kiddle encyclopedia articles (including the article images and facts) can be freely used under Attribution-ShareAlike license, unless stated otherwise. Cite this article:
Adephaga Facts for Kids. Kiddle Encyclopedia.