Click beetle is the common name for beetles in the family Elateridae. They are also called elaters, snapping beetles, spring beetles or skipjacks. These beetles can be found almost anywhere on Earth. They have the unusual ability to flick themselves into the air. When they do this, they make a "clicking" (or snapping) sound. The beetle does this by flexing the joint between sections of the thorax, where there is a spine on one side of the joint and a groove on the other. The peg is snapped into the groove. This makes a "click" that flicks the beetle into the air. If it lands on its back, then it repeats the click until it lands on its legs. Clicking is mainly used to escape from predators. The click can make it jump between 15 and 30 centimetres into the air.

The Elateridae family of beetles was first defined in 1815. There are about 9,300 known species around the world. This includes 965 species in North America.

Most click beetles are under 2 centimeters long and dull in colour. Some species are large and colorful. They usually look for food during the night, and are not usually active during the day.

Click beetle larvae are called wireworms. Wireworms usually spend three or four years living under the soil. Here they feed on rotting plants and roots. They can cause damage to some crops. When this happens, they can be very difficult to kill off. 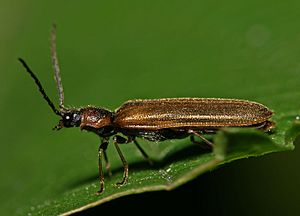 Lateral aspect of a typical member of the Elateridae. Just below the base of the wings the "clicking" apparatus is visible in silhouette, with the "peg" or "process" in contact with the raised slot or "cavity" into which it slips to force the impact when required

All content from Kiddle encyclopedia articles (including the article images and facts) can be freely used under Attribution-ShareAlike license, unless stated otherwise. Cite this article:
Click beetle Facts for Kids. Kiddle Encyclopedia.