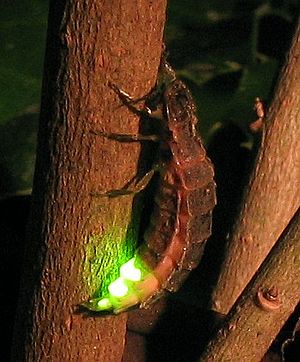 Image of a glow worm (this one is actually a Firefly)

A glow-worm, or glowworm, is an insect. Other names for glow-worms are fire-fly and lightning bug.

Four families of beetles are bioluminescent. The wingless larviform females and larvae of these bioluminescent species are usually known as "glowworms". Winged males may or may not also exhibit bioluminescence. Their light may be emitted as flashes or as a constant glow, and usually range in color from green, yellow, to orange. The families are closely related, and are all members of the click beetle superfamily, Elateroidea. Phylogenetic analyses have indicated that bioluminescence may have a single evolutionary origin among the families Lampyridae, Phengodidae, and Rhagophthalmidae; but is likely to have arisen independently among Elateridae.

Three genera of fungus gnats are bioluminescent, and known as "glowworms" in their larval stage. They produce a blue-green light. The larvae spin sticky webs to catch food. They are found in caves, overhangs, rock cavities, and other sheltered, wet areas. They are usually classified under the family Keroplatidae, but this is not universally accepted and some authors place them under Mycetophilidae instead. Despite the similarities in function and appearance, the bioluminescent systems of the three genera are not homologous and are believed to have evolved separately.

Lifecycle of a Glow Worm

The Glow Worm goes through a holometabolic life cycle; a whole transformation from egg to larva, to pupa, to adult. The Glow Worms in this cave are the local species, Arachnocampa flava, which are found only in rainforest areas of southeast Queensland.

All content from Kiddle encyclopedia articles (including the article images and facts) can be freely used under Attribution-ShareAlike license, unless stated otherwise. Cite this article:
Glow-worm Facts for Kids. Kiddle Encyclopedia.