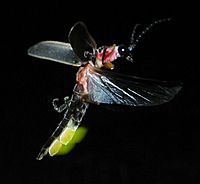 Example of a bioluminescent species of mushroom...

...glowing with the lights off.

ATP (adenosine tri-phosphate), the biological energy source, reacts with luciferin with the aid of the enzyme luciferase to yield an intermediate complex. This complex combines with oxygen to produce a highly chemiluminescent (brightly shining) compound.

The role of Gamma Proteobacteria in producing light is discussed in detail in reference works. The capacity to produce light is an extension of normal metabolism: all chemical reactions produce a few photons. Visible light is produced when the photon production increases. In the case of bacteria, the original function of the reaction was probably to detoxify excessive oxygen.

Bioluminescence is mainly a marine phenomenon.

"It is the predominant source of light in the largest fraction of the habitable volume of the earth, the deep ocean. In contrast, bioluminescence is essentially absent (with a few exceptions) in fresh water, even in Lake Baikal".

Bioluminescence is found in the sea at all levels.: planktonic, pelagic and benthic organisms. Some planktonic groups, such as dinoflagellates and ctenophores (comb jellies) use it in most species. Most deep-sea marine life use bioluminescence in one form or another. Usually, marine light-emission belongs in the blue and green light spectrum, the wavelengths that can transmit through seawater most easily.

In some squid species bacterial bioluminescence is used for counterillumination so the animal matches the overhead environmental light seen from below. In these animals, light organs control the contrast of this illumination to create optiminal matching. Usually these light organs are separate from the tissue containing the bioluminescent bacteria. 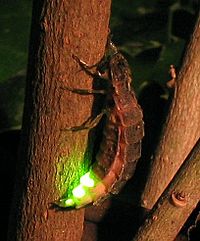 Bioluminescence is used as a lure to attract prey by several deep sea fish such as the anglerfish. A dangling lure on the head of the fish attracts small animals to it within striking distance. Some fish, however, use a non-bioluminescent lure.

The cookiecutter shark uses bioluminescence for camouflage, but a small patch on its underbelly remains dark and appears as a small fish to large predatory fish like tuna and mackerel swimming beneath it. When these fish try to consume the "small fish", they are bitten by the shark, which gouges out small circular "cookie cutter" shaped chunks of flesh from its hosts.

Attracting mates is an important function of bioluminescence. This is seen in fireflies, which use periodic flashing in their abdomens to attract mates in the mating season. In the marine environment this has only been well-documented in certain small ostracod crustaceans, but may be quite common.

Certain squid and small crustaceans use bioluminescence as many squid use ink. A cloud of luminescence is expelled, confusing or repelling a potential predator while the squid or crustacean escapes to safety. Every species of firefly has larvae that glow to repel predators.

Bioluminescent organisms are a target for many areas of research. Luciferase systems are widely used in the field of genetic engineering. They have also been used in biomedical research, to give some cells visible labels. Luciferin can be added to molecules and cells to make them visible under the microscope. "This market is now worth about £20bn. If you go into a hospital and have a blood test which measures viral proteins, cancer proteins, hormones, vitamins, bacterial proteins, drugs, it will almost certainly use this technique".

The structure of photophores, the light producing organs in bioluminescent organisms, are being investigated by industrial designers.

This is a list of organisms that have visible bioluminescence:

Despite their name, fireflies are actually beetles which use an enzymatic reaction involving a chemical compound called luciferin to produce their typical greenish flashing light. As well as possibly warning predators about their toxicity, it is thought the main purpose of their flashing abdomen is to attract mates.

All content from Kiddle encyclopedia articles (including the article images and facts) can be freely used under Attribution-ShareAlike license, unless stated otherwise. Cite this article:
Bioluminescence Facts for Kids. Kiddle Encyclopedia.