The colossal squid, Mesonychoteuthis hamiltoni, is the biggest squid in the world, 12–14 metres (39–46 feet) long.

The colossal squid is bigger than a giant squid. Its body is reddish brown and it lives up to 2000m below the surface of the Southern Ocean. It is the main food eaten by sperm whales. The colossal squid has ammonium chloride in its body, so it tastes in-edible.

Unlike the giant squid, whose arms and tentacles have only suckers lined with small teeth, the colossal squid's limbs are also equipped with sharp hooks: some swivelling, others three-pointed. Its body is wider and stouter, and therefore heavier, than that of the giant squid. Colossal squid are believed to have longer mantles than the giant squid, but shorter tentacles.

The squid exhibits abyssal gigantism. The beak of M. hamiltoni is the largest known of any squid, and more robust than that of the giant squid. The colossal squid also has the largest eyes documented in the animal kingdom; a partly collapsed specimen measured 27 cm (11 in) in diameter, with a 9 cm (3.5 in) pupil. The eye was estimated to be 30 to 40 cm (12 to 16 in) when the squid was alive.

The squid's known range extends thousands of kilometres northward from Antarctica to southern South America, southern South Africa, and the southern tip of New Zealand, making it primarily an inhabitant of the entire circumantarctic Southern Ocean.

Little is known about the life of this creature, but it is believed to feed on prey such as chaetognatha, large fish such as the Patagonian toothfish, and other squid in the deep ocean using bioluminescence.

The colossal squid is thought to have a slow metabolic rate, needing only around 30 grams (1.1 oz) of prey daily. Estimates of its energetic demands suggest it is a slow-moving ambush predator, using its large eyes primarily for predator detection rather than active hunting. 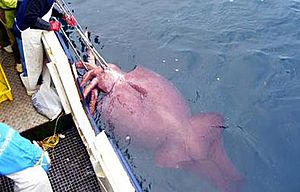 On February 22, 2007, authorities in New Zealand announced the largest known colossal squid had been captured. The specimen weighed 495 kg (1,091 lb) and was initially estimated to measure 4.5 m (15 ft) in total length. Fishermen on the vessel San Aspiring, owned by the Sanford Seafood Company, caught the animal in the freezing Antarctic waters of the Ross Sea. It was brought to the surface as it fed on an Antarctic toothfish that had been caught off a long line. It would not let go of its prey and could not be removed from the line by the fishermen, so they decided to catch it instead.

All content from Kiddle encyclopedia articles (including the article images and facts) can be freely used under Attribution-ShareAlike license, unless stated otherwise. Cite this article:
Colossal squid Facts for Kids. Kiddle Encyclopedia.