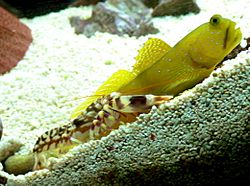 Symbiosis (pl. symbioses) means living together. It describes close and long-term relationships between different species. The term was used by Albert Bernhard Frank to describe the mutualistic relationship in lichens. and by Anton de Bary in 1879, as "the living together of unlike organisms".

The relevance of symbiosis is its frequency and its evolutionary significance. There appear to be no higher plants or animals without symbionts. Those symbionts are of great importance to the larger organisms, who in most cases would be unable to live as they do without their symbionts. Mycorrhiza in higher plants, and gut flora in insects and vertebrates are examples. Humans are no exception.

Furthermore, most of these associations are between organisms not just from different species, but from different kingdoms. And lastly, the cells of all eukaryotes contain organelles which are descendants of symbiotic relationships which began at least a billion years ago. Mitochondria and plastids are examples. The conclusion must be that symbiosis has been highly significant in the evolution of life. 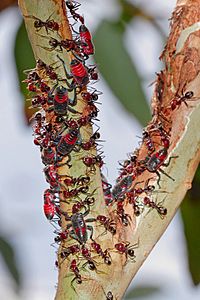 Leafhoppers nymphs protected by an army of Meat ants. The ants feed on secretions from the nymphs

The definition of symbiosis has been controversial. Some believe symbiosis should only refer to persistent mutualisms, while others believe it should apply to all kinds of lon-term biological interactions.

The various forms of symbiosis include:

Symbiosis does not always benefit both partners. This is what may happen:

Type 2: Partners live as one organism

Clownfish in its sea anemone 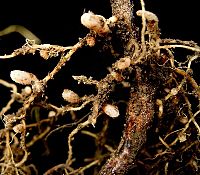 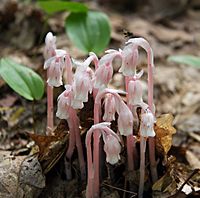 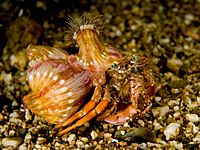 Dardanus pedunculatus Hermit crab with symbiotic anemones Calliactis sp. attached to its shell. The anemones provide protection with their stinging cells, and they get mobility from the crab.

This kind of symbiosis is called endosymbiosis. Examples are:

Almost for certain, this happened to form the eukaryote cell. That's the type of cell all animals and plants are made of. The organelles inside the cell, such as mitochondria and chloroplasts, contain some DNA. This DNA is the remnant of a once separate bacterium. The theory is that the eukaryote cell evolved by the fusion of several bacteria or archaea organisms.

All content from Kiddle encyclopedia articles (including the article images and facts) can be freely used under Attribution-ShareAlike license, unless stated otherwise. Cite this article:
Symbiosis Facts for Kids. Kiddle Encyclopedia.