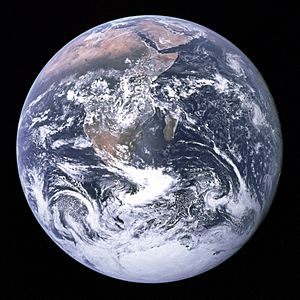 Earth is the only planet in the Universe from which life is known; the cradle and home of humanity, and of all known forms of life. 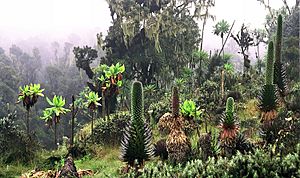 Life is a biological concept regarding the characteristics, state, or mode that separates a living thing from dead matter. The word itself may refer to a living being or ongoing processes of which living things are a part of. It may also refer to the period during which something is functional (as between birth and death), the condition of an entity that has been born but yet has to die or that which makes a living thing alive.

The study of life is called biology, and people who study life are called biologists. A lifespan is the average length of life in a species. Most life on Earth is powered by solar energy, the only known exceptions being the chemosynthetic bacteria living around the hydrothermal vents on the ocean floor. All life on Earth is based on the chemistry of carbon compounds, specifically involving long-chain molecules such as proteins and nucleic acid. With water, which is essential, the long molecules are wrapped inside membranes to form cells. This may or may not be true of all possible forms of life in the Universe: it is true of all life on Earth today.

Living organisms can be explained as open systems. They are always changing, because they exchange materials and information with their environment. They undergo metabolism, maintain homeostasis, possess a capacity to grow, respond to stimuli and reproduce.

Through natural selection, they adapt to their environment in successive generations. More complex living organisms can communicate through various means. Many life forms can be found on Earth. The properties common to these organisms—plants, animals, fungi, protists, archaea, and bacteria—are a carbon and water-based cellular form with complex organization and heritable genetic information.

One explanation of life is called the cell theory. The cell theory has three basic points: all living things are made up of cells. The cell is the smallest living thing that can do all the things needed for life. All cells must come from pre-existing cells.

Something is often said to be alive if it:

However, not all living things fit every point on this list.

They do, however, fit the biochemical definitions: they are made of the same kind of chemicals.

The thermodynamic definition of life is any system which can keep its entropy levels below maximum (usually through adaptation and mutations).

A modern definition was given by Humberto Maturana and Francisco Varela in 1980, to which they gave the name autopoiesis:

Roth commented that "In short, organisms are self-reproducing and self-maintaining, or 'autopoietic', systems". This approach makes use of molecular biology ideas and systems science ideas.

Gallery of images of life

All content from Kiddle encyclopedia articles (including the article images and facts) can be freely used under Attribution-ShareAlike license, unless stated otherwise. Cite this article:
Life Facts for Kids. Kiddle Encyclopedia.