Cell growth (or interphase) is shorthand for the idea of "growth in cell populations" by means of cell reproduction.

It is the stage which cells are preparing for the next division, biochemical activities and reactions are taking place, however no obvious changes can be seen at this stage. Until cell division, a parent cell divides to form two or more new daughter cells.

Cell populations go through a type of exponential growth called doubling. Thus, each generation of cells should be twice as numerous as the previous generation. But not all cells survive in each generation, as written by Richard Dawkins in 1997.

Cell reproduction is more complex in eukaryotes than in other organisms. Prokaryotic cells such as bacterial cells reproduce by binary fission, a process that includes DNA replication, chromosome segregation, and cytokinesis. Eukaryotic cell reproduction either involves mitosis or a more complex process called meiosis. Mitosis and meiosis are sometimes called the two "nuclear division" processes. 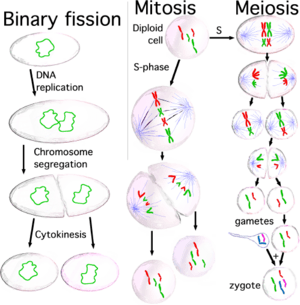 Comparison of the three types of cell reproduction

The DNA content of a cell is duplicated at the start of the cell reproduction process. Prior to DNA replication, the DNA content of a cell can be represented as the amount Z (the cell has Z chromosomes). After the DNA replication process, the amount of DNA in the cell is 2Z (multiplication: 2 x Z = 2Z). During Binary fission and mitosis the duplicated DNA content of the reproducing parental cell is separated into two equal halves that are destined to end up in the two daughter cells. The final part of the cell reproduction process is cell division, when daughter cells physically split apart from a parental cell. During meiosis, there are two cell division steps that together produce the four daughter cells.

All content from Kiddle encyclopedia articles (including the article images and facts) can be freely used under Attribution-ShareAlike license, unless stated otherwise. Cite this article:
Cell growth Facts for Kids. Kiddle Encyclopedia.