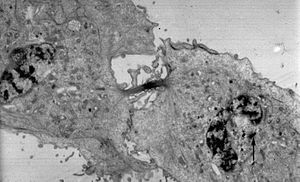 Cytokinesis of an animal cell, pictured by an electron microscope

Cytokinesis is the division of cells after either mitosis or meiosis I and II.

During cytokinesis, the cytoplasm (the liquid center of the cell that holds the organelles into place) splits into two equal halves, and the cell becomes two daughter cells. This occurs right after the beginning of anaphase (in mitosis and in meiosis I and II) and continues during telophase (in mitosis and in meiosis I and II) until the cell has completely divided. mitosis and meiosis II, interphase starts again after cytokinesis. A new and complete nucleus has been formed in each of the two cells.

In plants cytokinesis is slightly different. As plant cells cannot move apart because of their cell wall, a cell plate begins to form during late anaphase and throughout telophase. When the cytoplasm and organelles are divided evenly between the two new cells, the plate then becomes less flimsy and soon becomes another cell wall separating the daughter cells. Cytokinesis splits the cell wall, unlike animal cells, where it splits the cytoplasm. The cell wall grows later as the two new cells expand.

All content from Kiddle encyclopedia articles (including the article images and facts) can be freely used under Attribution-ShareAlike license, unless stated otherwise. Cite this article:
Cytokinesis Facts for Kids. Kiddle Encyclopedia.