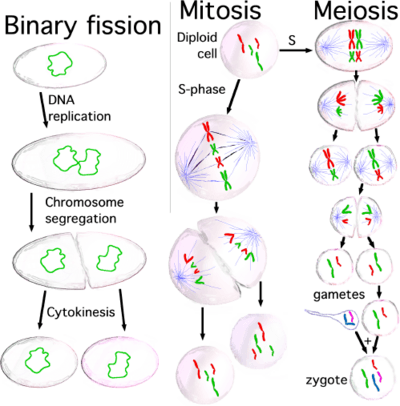 Three types of cell division: left is binary fission as in bacteria; right are mitosis and meiosis as in eukaryotes.

Cell division is the process by which a cell, called the parent cell, divides into two cells, called daughter cells. When the cell divides, everything inside it divides also. The nucleus and the chromosomes divide, and the mitochondria divide also.

All content from Kiddle encyclopedia articles (including the article images and facts) can be freely used under Attribution-ShareAlike license, unless stated otherwise. Cite this article:
Cell division Facts for Kids. Kiddle Encyclopedia.