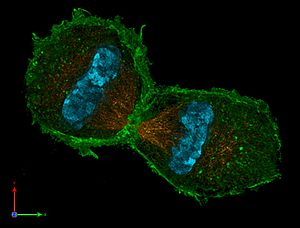 3D representation of a living cell during the process of mitosis, example of an autopoietic system.

Autopoiesis refers to life and other self-organising systems. The word means "self creation or self-production". It refers to a system which can reproduce and sustain itself.

The term was introduced in 1972 by Chilean biologists Humberto Maturana and Francisco Varela to define the self-maintaining chemistry of living cells. Since then the concept has also been applied to systems theory and sociology.

Autopoiesis was a modern definition for life, plus any other systems with lifelike properties. To qualify for the name autopoiesis a system would need to show three main features:

Roth commented that "In short, organisms are self-reproducing and self-maintaining, or 'autopoietic', systems". This approach makes use of molecular biology ideas and systems science ideas, but it does not refer to the particular way life is organised on Earth. This is because the authors thought it was possible for machines to have those features, and for other types of life to exist.

All content from Kiddle encyclopedia articles (including the article images and facts) can be freely used under Attribution-ShareAlike license, unless stated otherwise. Cite this article:
Autopoiesis Facts for Kids. Kiddle Encyclopedia.