The blue jay (Cyanocitta cristata) is a passerine bird native to North America. It is adaptable, aggressive and omnivorous.

The blue jay measures 22–30 cm (9–12 inches) from bill to tail and weighs 70–100 grams (2.47–3.53 oz), with a wingspan of 34–43 cm (13–17 inches). There is a crown of feathers on the top of the head, which may be raised or lowered according to the bird's mood. When excited or aggressive, the crest may be fully raised. When scared, the crest comes outwards, brushlike. When the bird is feeding among other jays or resting, the crest is flattened to the head.

Its plumage is lavender-blue to mid-blue in the crest, back, wings, and tail, and its face is white. The underside is off-white and the neck has a thin stripe with black which extends to the sides of the head. The main wing and tail feathers are deep with black, sky-blue and white. The bill, legs, and eyes are all black. Males and females look nearly the same except that males are a little bit larger.

Blue jays have strong black bills used for cracking open nuts, and acorns and for eating corn, grains and seeds, although they also eat insects such as beetles, grasshoppers, and caterpillars.

Blue jays can make many different sounds, and single sounds may vary a bit. Blue jays can learn to mimic human speech. Blue jays can also copy the callings of local hawks so well that it is sometimes difficult to tell which it is. Their voice is normal of most jays in being varied, but the most commonly thought sound is the "alarm call", which is a loud, almost gull-like scream. There is also a high-pitched jayer-jayer call that increases in speed as the bird becomes more excited.This very call can be easily confused with the chick-a-dee's song because of the slow starting chick-ah-dee-ee. Blue Jays will use these calls to band together to mob predators such as hawks and drive them away from the jays' nests.

The blue jay is a slow flier ( 32–40 km/h (20-25 mi/h) when unprovoked) and an easy prey for hawks and owls, when it flies in open lands. It flies with its body and tail held level, with slow wing beats. It is sometimes assertive toward other birds and may chase birds from bird feeders or other food sources, although this happens much less often than it is blamed for. This can be good to other species as well, as it may chase predatory birds, such as hawks and owls which sometimes feed on jays, and will scream if it sees a predator within its territory. It has also been known to sound an "alarm call" when hawks or other dangers are near, and smaller birds often know this call and hide themselves away accordingly. It may also be aggressive towards humans who come close to its nest, and if an owl roosts near the nest during the daytime the blue jay mobs it until it takes a new roost.

A blue jay eating a peanut

Its food is found both on the ground and in trees and has almost all known types of plant and animal sources, like acorns and beech mast, weed seeds, grain, fruits and other berries, peanuts, bread, meat, small invertebrates of many types, scraps in town parks, bird-table food and rarely eggs and nestlings. Blue jays will sometimes catch food, though to what extent is different among individuals. 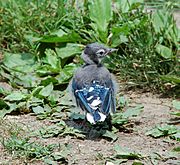 A young blue jay leaving the nest in mid-June.

The mating season starts in mid-March and reaches into July. Any nice tree or large shrub may be used for nesting, though an evergreen is preferred. The nest is normally made at a height of 3 to 10 meters. This cup-shaped nest is made of twigs, small roots, bark strips, moss, other plant material, cloth, paper, and feathers, sometimes with mud added to the cup.

Blue jays mostly form monogamous pair bonds for life. Both sexes make the nest and take care of the young, though only the female broods them. The male feeds the female while she is brooding the eggs. There are normally 4–5 eggs laid and incubated over 16–18 days. The young leave the nest normally between 17–21 days after hatching.

Jays are some of the more smart birds. They will wait and watch for a person to put food down and as soon as the person walks away they will come down from their hiding place and take it. Along with crows, jays will also watch a person planting seed crops and afterwards dig up and eat the seeds. Jays are very territorial birds, and they will chase others from a feeder for an easier meal. The blue jay has a bad reputation as a raider of other birds' nests, taking eggs, chicks, and nests. However, this may not be as widespread as is normally thought.

All content from Kiddle encyclopedia articles (including the article images and facts) can be freely used under Attribution-ShareAlike license, unless stated otherwise. Cite this article:
Blue jay Facts for Kids. Kiddle Encyclopedia.