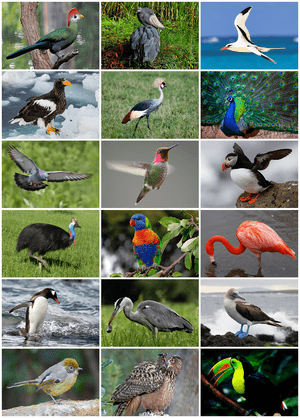 The Neornithes are the modern birds. These are the most recent common ancestor of all living birds and all its descendants. There are about 9 to 10,000 known living bird species in the world.

Modern birds are divided into two superorders; the Palaeognathae (tinamous and flightless ratites), and the Neognathae, containing all other birds.

It is generally agreed that the Neornithes evolved in the Cretaceous and that the split between the Palaeognathae and Neognathae, and then the split between fowl and the other Neognathae, occurred before the K/T extinction event. The earliest fossil remains of the Neornithes might be about ten million years after the start of the Cretaceous. Gallornis may be the first fossil, but its remains are only a worn partial femur and a fragment of the humerus.

There are different opinions about whether the radiation of the remaining neognathes occurred before or after the extinction of the other dinosaurs. Molecular dating suggests a Cretaceous radiation, while fossil evidence suggest an early Tertiary radiation. Attempts made to bring together the molecular and fossil evidence have proved controversial.

All content from Kiddle encyclopedia articles (including the article images and facts) can be freely used under Attribution-ShareAlike license, unless stated otherwise. Cite this article:
Neornithes Facts for Kids. Kiddle Encyclopedia.