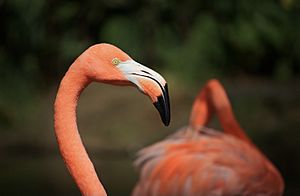 The American flamingo (Phoenicopterus ruber) is a large species of flamingo closely related to the greater flamingo and Chilean flamingo. It was formerly considered conspecific with the greater flamingo, but that treatment is now widely viewed (e.g. by the American and British Ornithologists' Unions) as incorrect due to a lack of evidence. It is also known as the Caribbean flamingo, although it is also present in the Galápagos Islands. It is the only flamingo that naturally inhabits North America. 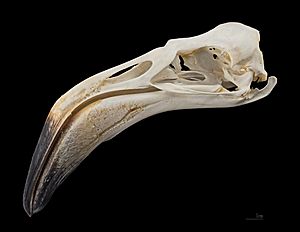 The American flamingo breeds in the Galápagos Islands, coastal Colombia, Venezuela and nearby islands, northern Brazil, Trinidad and Tobago, along the northern coast of the Yucatán Peninsula, Cuba, Jamaica, Hispaniola (Dominican Republic and Haiti), the Bahamas, Virgin Islands, the Turks and Caicos Islands, Cameron Parish, Louisiana, and in extreme southern Florida. The population in the Galápagos Islands differs genetically from that in the Caribbean, and the Galápagos flamingos are significantly smaller, exhibit sexual dimorphism in body shape, and lay smaller eggs. They are sometimes separated as Phoenicopterus ruber glyphorhynchus.

Its preferred habitats are similar to those of its relatives: saline lagoons, mudflats, and shallow, brackish coastal or inland lakes. An example habitat is the Petenes mangroves ecoregion of the Yucatán. 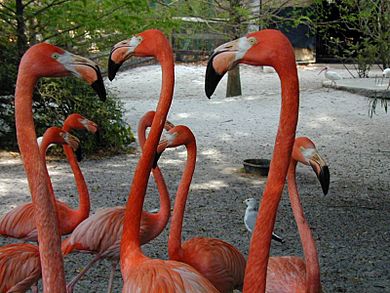 The American flamingo is also found in South Florida and the Florida Keys, both of which were likely the northernmost extent of its distribution. The existence of flamingo eggs in museum collections labeled as collected from Florida indicates that they likely nested there as well. 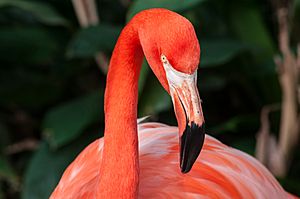 The American flamingo is a large wading bird with reddish-pink plumage. Like all flamingos, it lays a single chalky-white egg on a mud mound, between May and August; incubation until hatching takes from 28 to 32 days; both parents brood the young for a period up to 6 years when they reach sexual maturity. Their life expectancy of 40 years is one of the longest in birds.

Adult American flamingos are smaller on average than greater flamingos, but are the largest flamingos in the Americas. They measure from 120 to 145 cm (47 to 57 in) tall. The males weigh an average of 2.8 kg (6.2 lb), while females average 2.2 kg (4.9 lb). Most of its plumage is pink, giving rise to its earlier name of rosy flamingo and differentiating adults from the much paler greater flamingo. The wing coverts are red, and the primary and secondary flight feathers are black. The bill is pink and white with an extensive black tip. The legs are entirely pink. The call is a goose-like honking. 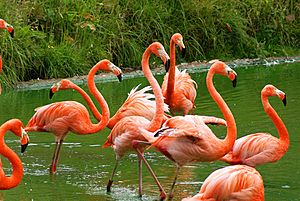 A flock at Whipsnade Zoo

It is one of the species to which the Agreement on the Conservation of African-Eurasian Migratory Waterbirds applies.

Mating and bonding behaviors of P. ruber individuals have been extensively studied in captivity. 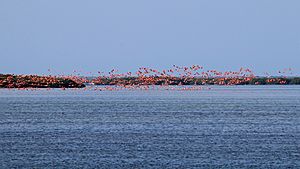 While males usually initiate courtship, females control the process. If interest is mutual, a female walks by the male, and if the male is receptive, he walks with her. Both parties make synchronized movements until one member aborts this process. For low-intensity courtships, males and females walk in unison with their heads raised. In high-intensity courtships, males and females walk at a quick pace with their heads dropped in a false feeding posture. This high-intensity courtship stops at any point if either bird turns and the other does not follow, the heads are raised, unison movements are stopped, or the pace of movement is slowed. Long-term pairs do not frequently engage in courtship behaviors or in-group display. Pairs often stand, sleep, and eat in close proximity.

The egg is attended constantly and equally by alternating parents. Chicks at the nest are attended constantly by alternating parents, up to 7–11 days of age. Most attentive periods during incubation and brooding last 21–60 hours, both in the case where the ‘off-duty’ parents remain in the same lagoon to feed, or (when breeding occurs in lagoons deficient in food), they fly to other lagoons to feed. Nest reliefs during incubation take place predominantly in late afternoon, or early morning. 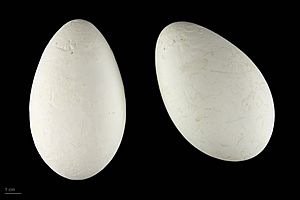 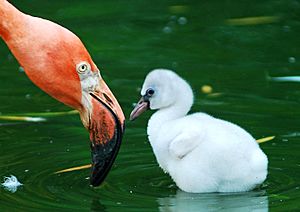 A chick and its mother

The American flamingo has adapted to its shallow-water environment in several ways. It has evolved long legs and large webbed feet to wade and stir up the bottom of the water bed to bring up their food source to then be retrieved. To feed, it has evolved a specialized beak which is hooked downward and features marginal lamellae on the upper mandible, and inner and outer lamellae on both the upper and lower mandibles. These are adapted for filtering out differently sized food from water.

Depending on the food source in their area, diets depend on the exact morphology of their beaks on what can and cannot be strained out of them. It submerges its head under water to retrieve its food, and may have its head under water for long times, which requires it to hold its breath.

Factors which affect the habitat choice of American flamingos are environmental temperatures, water depth, food source, accessibility of an area, and the presence of vegetation beds in feeding areas. If available food items do not meet the needs of the flamingos or the temperature is not appropriate to their requirements, they move to a better feeding or more temperate area.

Like other flamingo species, American flamingos will migrate short distances to ensure that they get enough food or because their current habitat has been disturbed in some way. One habitat disturbance that has been observed to cause flamingos to leave their feeding grounds is elevated water levels. These conditions make it difficult for Phoenicopterus ruber to wade, hindering their ability to access food. The flamingos will then abandon their feeding grounds in search of an alternate food source. While the flights are not as long as other migratory birds, flamingos still fly for periods without eating.

All content from Kiddle encyclopedia articles (including the article images and facts) can be freely used under Attribution-ShareAlike license, unless stated otherwise. Cite this article:
American flamingo Facts for Kids. Kiddle Encyclopedia.