The Turks and Caicos Islands are two groups of islands in the Caribbean Sea, near the Bahamas. The islands lie southeast of Mayaguana in the Bahamas island chain and north of the island of Hispaniola. Cockburn Town, the capital since 1766, is in the Grand Turk Island about 1,042 kilometres (647 mi) east-southeast of Miami, United States.

The islands have a total land area of 616.3 square kilometres (238.0 sq mi). and they are on a tentative list of UNESCO World Heritage Sites.

The government of Great Britain is also the ruler of the Turks and Caicos, but that ruler always acts through a governor. There are local elections for premier (similar to a president). Government offices are in the Grand Turk Island. 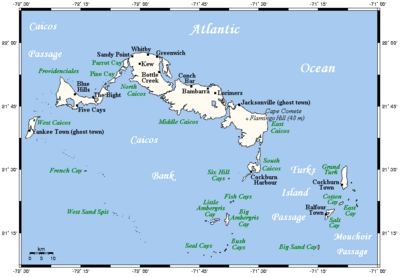 Map of the Turks and Caicos Islands.

The eight main islands and more than 299 smaller islands have a total land area of 616.3 square kilometres (238.0 sq mi), consisting primarily of low, flat limestone with extensive marshes and mangrove swamps and 332 square kilometres (128 sq mi) of beach front. The weather is usually sunny and relatively dry, but hurricanes are frequent during summer. The islands have limited natural fresh water resources; private cisterns collect rainwater for drinking. The primary natural resources are spiny lobster, conch and other shellfish.

The Turks Islands are separated from the Caicos Islands by Turks Island Passage, which is more than 2,200 metres (7,200 ft) deep, The islands form a chain that goes from north to south.

There are only two inhabited islands, and these are:

The inhabited islands of the group are:

Turks and Caicos Islands features a relatively dry and sunny marine tropical climate with relatively consistent temperatures throughout the course of the year. The temperature during summer rarely is over 33 °C (91 °F) and during winter rarely is below 18 °C (64 °F).

The official language of the islands is English and the population also speaks Turks and Caicos Islands Creole which is similar to Bahamian Creole. Due to its close proximity to Cuba and Hispaniola, large Haitian Creole and Spanish-speaking communities have developed in the territory due to immigration from Creole-speaking Haiti and from Spanish-speaking Cuba and Dominican Republic.

This is a list of cities in the Turks and Caicos Islands. 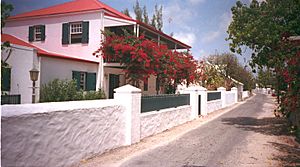 A street in Cockburn Town, the capital of the Turks and Caicos Islands

All content from Kiddle encyclopedia articles (including the article images and facts) can be freely used under Attribution-ShareAlike license, unless stated otherwise. Cite this article:
Turks and Caicos Islands Facts for Kids. Kiddle Encyclopedia.