Juan Ponce de León (1474 – July 1521) was a Spanish explorer and conquistador born in Santervás de Campos, Valladolid, Spain in 1474. Though little is known about his family, he was of noble birth and served in the Spanish military from a young age. He first came to the Americas as a "gentlemen volunteer" with Christopher Columbus' second expedition in 1493.

By the early 1500s, Ponce de León was a top military official in the colonial government of Hispaniola, where he helped crush a rebellion of the native Taíno people. He was authorized to explore the neighboring island of Puerto Rico in 1508 and was named the first Governor of Puerto Rico by appointment of the Spanish crown in 1509. While Ponce de León grew quite wealthy from his plantations and mines, he faced an ongoing legal conflict with Diego Columbus, the late Christopher Columbus's son, over the right to govern Puerto Rico. After a long court battle, Columbus replaced Ponce de León as governor in 1511. Ponce de León decided to follow the advice of the sympathetic King Ferdinand and explore more of the Caribbean Sea.

In 1513, Ponce de León led the first known European expedition to La Florida, which he named during his first voyage to the area. He landed somewhere along Florida's east coast, then charted the Atlantic coast down to the Florida Keys and north along the Gulf coast, perhaps as far as Charlotte Harbor. Though in popular culture he was supposedly searching for the Fountain of Youth, there is no contemporary evidence to support the story, which all modern historians call a myth. 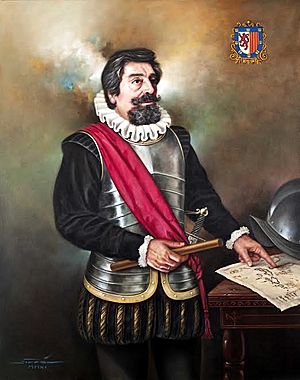 Ponce de León returned to Spain in 1514 and was knighted by King Ferdinand, who also reinstated him as the governor of Puerto Rico and authorized him to settle Florida. He returned to the Caribbean in 1515, but plans to organize an expedition to Florida were delayed by the death of King Ferdinand in 1516, after which Ponce de León again traveled to Spain to defend his grants and titles. He would not return to Puerto Rico for two years.

In 1521, Ponce de León finally returned to southwest Florida with the first large-scale attempt to establish a Spanish colony in what is now the continental United States. However, the native Calusa people fiercely resisted the incursion, and he was seriously wounded in a skirmish. The colonization attempt was abandoned, and its leader died from his wounds soon after returning to Cuba. Ponce de León was interred in Puerto Rico, and his tomb is located inside of the Cathedral of San Juan Bautista in San Juan.

Juan Ponce de León was born in the village of Santervás de Campos in the northern part of what is now the Spanish province of Valladolid. Although early historians placed his birth in 1460, and this date has been used traditionally, more recent evidence shows he was likely born in 1474. The surname Ponce de León dates from the 13th century. The Ponce de León lineage began with Ponce Vélaz de Cabrera, descendant of count Bermudo Núñez, and Sancha Ponce de Cabrera, daughter of Ponce Giraldo de Cabrera.

The identity of his parents is still unknown, but he appears to have been a member of a distinguished and influential noble family. His relatives included Rodrigo Ponce de León, Marquis of Cádiz, a celebrated figure in the Moorish wars.

Ponce de León was related to another notable family, the Núñez de Guzmáns, and as a young man he served as squire to Pedro Núñez de Guzmán, Knight Commander of the Order of Calatrava. Gonzalo Fernández de Oviedo y Valdés, states that Ponce de León gained his experience as a soldier fighting in the Spanish campaigns that defeated the Moors in Granada and completed the re-conquest of Spain in 1492. 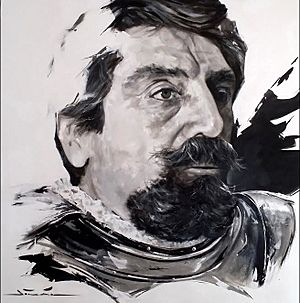 Once the war against the Emirate of Granada ended, there was no apparent need for his military services at home, so, like many of his contemporaries, Ponce de León looked abroad for his next opportunity. In September 1493, some 1,200 sailors, colonists, and soldiers joined Christopher Columbus for his second voyage to the New World. Ponce de León was a member of this expedition, one of 200 "gentleman volunteers."

The fleet reached the Caribbean in November 1493. They visited several islands before arriving at their primary destination in Hispaniola. In particular they anchored on the coast of a large island the natives called Borinquen but would eventually become known as Puerto Rico. This was Ponce de León's first glimpse of the place that would play a major role in his future.

All content from Kiddle encyclopedia articles (including the article images and facts) can be freely used under Attribution-ShareAlike license, unless stated otherwise. Cite this article:
Juan Ponce de León Facts for Kids. Kiddle Encyclopedia.