The park is noted for abundant sea life, tropical bird breeding grounds, colorful coral reefs, and legends of shipwrecks and sunken treasures. The park's centerpiece is Fort Jefferson, a massive but unfinished coastal fortress. Fort Jefferson is the largest brick masonry structure in the Western Hemisphere, and is composed of more than 16 million bricks. Among United States forts it is exceeded in size only by Fort Monroe, Virginia, and Fort Adams, Rhode Island. Dry Tortugas is unique in its combination of a largely undisturbed tropical ecosystem with significant historic artifacts. The park is accessible only by seaplane or boat and has averaged about 63,000 visitors annually in the period from 2008 to 2017. Activities include snorkeling, picnicking, birdwatching, camping, scuba diving, saltwater fishing and kayaking. Overnight camping is limited to 8 primitive campsites at the Garden Key campground — located just south of Fort Jefferson.

Dry Tortugas National Park is part of the Everglades & Dry Tortugas Biosphere Reserve, established by UNESCO in 1976 under its Man and the Biosphere Programme.

Map of the Dry Tortugas archipelago

The Dry Tortugas is a small archipelago of coral islands about 70 miles (110 km) west of Key West, Florida. They represent the westernmost extent of the Florida Keys, though several reefs and submarine banks continue westward outside the park, beyond the Tortugas. The park area is more than 99 percent water. The seven major islands, all within the park, are, roughly from west to east, Loggerhead Key, Garden Key, Bush Key, Long Key, Hospital Key, Middle Key and East Key. The park is bordered on the east, south and west by the Florida Keys National Marine Sanctuary, and on the northwest by the Tortugas Ecological Reserve. The total land area within the park is 104 acres (42 ha). The park is in a tropical maritime climate, with rainy seasons coinciding with hurricane season from May to October, and a drier season from November through April. The area is heavily influenced by frequent hurricanes and tropical storms. Even with exposure to tropical systems the Tortugas are among the driest places in Florida, with an annual precipitation of about 49 inches (120 cm). There is little temperature variation, with high temperatures in summer around 90 °F (32 °C) and low temperatures in winter around 66 °F (19 °C).

The northern and western portions of the park, including the central island group, were designated a 46-square-mile (120 km2) "research natural area" on January 19, 2007, in which no marine life may be taken, nor may vessels anchor. Vessels wishing to moor in the research natural area must use designated mooring buoys or docks. About 54 percent of the park remains open for fishing.

Visiting the park by private boat is difficult because of its distance, so most visitors come by ferry or seaplane from Key West. Official ferry and transportation services to the Dry Tortugas includes the Yankee Freedom III catamaran and seaplane services.

The Dry Tortugas are the western extension of an arcuate chain of Pleistocene reef and oolitic limestone islands, with the eastern limit in the vicinity of Miami. These Florida Keys are the surface expression of the 6 km thick southern Florida carbonate platform, which has been accumulating sediments since the Early Cretaceous. Two stratigraphic units are exposed at the surface, the Key Largo Limestone and the Miami Limestone. The Key Largo Limestone are reefs up to 60 m thick, parallel to the shelf edge, consisting of hermatypic corals and calcarenites. The Miami Limestone is less than 15 m thick, and in general, is found behind the Key Largo Limestone reef, but overlies it in the western extent of the keys. It consists of a bryozoan facies and an oolitic facies and represents a subtidal shoal. Additionally, excellent examples of Holocene carbonate-sand deposits are found in the Dry Tortugas, consisting mainly of disarticulated Halimeda plates. Between the Dry Tortugas and Key West is a 12 m thick example of these sand deposits, known as "the quicksands".

The first European to see the Dry Tortugas was Juan Ponce de León, who visited on June 21, 1513. Ponce de León caught 160 sea turtles there and subsequently referred to the islands as the "Tortugas" (turtles). They are called Dry owing to the absence of surface fresh water on the island. The archipelago includes a high concentration of historically significant shipwrecks dating from the 17th century to the present. The Dry Tortugas were a significant American naval base from colonial times to the early 20th century, providing a sheltered anchorage and coaling station through the Spanish–American War.

Florida was acquired from Spain by the United States in 1822. The Dry Tortugas were seen as a strategic point for the control of the Florida Straits and the Gulf of Mexico. Work on a lighthouse on Garden Key started in 1825. Planning for a fortification began almost immediately, and construction started in 1847. In 1856 work on a new, more powerful lighthouse on Loggerhead Key was started to replace the Garden Key light.

Work was half complete in 1860. Construction continued into the American Civil War, but eventually stopped, and the fort was used as a military prison. It was here that Dr. Samuel Mudd, who was convicted of aiding John Wilkes Booth—the killer of President Abraham Lincoln—was imprisoned. Mudd later was freed after averting a viral outbreak. This use as a military prison continued until 1874. With the introduction of coal-fueled ships, the Dry Tortugas became a coaling station for U.S. Navy ships. 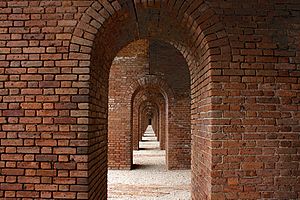 Fort Jefferson is a massive but unfinished coastal fortress. It is the largest masonry structure in the Western Hemisphere, and is composed of more than 16 million bricks.

Comprising 47,125 acres (19,071 ha), Fort Jefferson National Monument was designated by President Franklin D. Roosevelt under the Antiquities Act on January 4, 1935. The monument was expanded in 1983 and redesignated as Dry Tortugas National Park on October 26, 1992, by an act of Congress. Dry Tortugas is managed by the staff of Everglades National Park. The park was established to protect the island and marine ecosystems of the Dry Tortugas, to preserve Fort Jefferson and submerged cultural resources such as shipwrecks, and to allow for public access in a regulated manner.

During the Federal government shutdown of 1995 and 1996, Dry Tortugas was closed along with all other national parks. Seeing this as having a damaging effect on their tourism-dependent economy, the residents of Key West, Florida, raised money to keep Dry Tortugas open. The effort was inspired by the Smithsonian Institution, which raised private donations to keep its museums open during the shutdown.

Failing to find anybody to accept the money to reopen the park, Key West residents, under the auspices of the satirical micronation Conch Republic, sent a flotilla of civilian boats and fire department boats to Fort Jefferson in order to reopen the national park. When officials attempted to enter the fort, they were cited. The citation was contested in court the following year, and the resultant case, The United States of America v. Peter Anderson, was quickly dropped.

The park is a landing location for immigrants arriving from Cuba in homebuilt boats called "chugs." Receiving and housing the migrants is a particular problem for Dry Tortugas, which has limited resources for such arrivals and which is several hours from the nearest Coast Guard or Border Patrol units. Communications with Key West are accomplished using a satellite-based voice-over-IP system, which is prone to garbling and delays, and by a radio relay system using an abandoned Air Force tower between Key West and the Dry Tortugas. 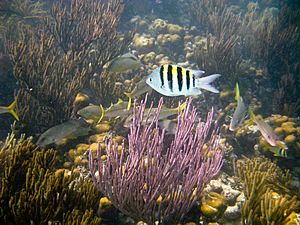 The Dry Tortugas archipelago is classified as a borderline subtropical—tropical ecosystem, hosting species that do not normally breed in, and are not commonly found anywhere else within, the continental United States or the islands and waters surrounding it.

Birdwatching activity peaks each spring (usually April) when dozens of migratory bird species can pass through the park in a single day. Many birds land inside the parade grounds of Fort Jefferson where they are often observed at close range. Common migratory warblers include the northern parula, American redstart, prairie warbler, hooded warbler, palm warbler, black-and-white warbler, common yellowthroat, yellow-rumped warbler, ovenbird, northern waterthrush, black-throated blue warbler, blackpoll warbler, and Cape May warbler, with more than 20 additional warbler species having shown up at least once. Several raptor species as well as cattle egrets are often seen hunting songbirds. Until early 2013 a small freshwater fountain existed beneath several seaside mahoe and buttonwood trees, and was the only freshwater source for many miles. Maintenance issues necessitated its removal, but a replacement water barrel is scheduled for installation in the fall of 2013. Each year several bird guides offer tours of Dry Tortugas National Park during April and early May when daily bird lists can often reach 100 or more species.

An active eradication program has resulted in the removal of invasive Casuarina trees and agave from Loggerhead Key, by cutting and herbicide treatment. Pterois, commonly known as lionfish, have also been found in the park's waters and the National Park Service is currently reviewing the lionfish management plan to determine what actions to take to manage the spread of this invasive species in Dry Tortugas National Park and Everglades National Park.

All content from Kiddle encyclopedia articles (including the article images and facts) can be freely used under Attribution-ShareAlike license, unless stated otherwise. Cite this article:
Dry Tortugas National Park Facts for Kids. Kiddle Encyclopedia.