The brown pelican (Pelecanus occidentalis) is a large bird that lives along the coasts of the Atlantic, Pacific Ocean, and Gulf of Mexico in North and South America.

Brown pelicans are carnivores (meat-eaters) and hunt during the day (they are diurnal). They eat mostly fish and some amphibians and crustaceans.

The Pelican is the smallest of the eight species of pelican, although it is a large bird in nearly every other regard. It is 106–137 cm (42–54 in) in length, weighs from 2.75 to 5.5 kg (6.1 to 12.1 lb) and has a wingspan from 1.83 to 2.5 m (6.0 to 8.2 ft). Through most of its range, the brown pelican is an unmistakable bird. Like all pelicans, this species has a very large bill, 28 to 34.8 cm (11.0 to 13.7 in) long in this case, with a gular pouch on the bottom for draining water when it scoops out prey. The head is white but often gets a yellowish wash in adult birds. The bill is grayish overall in most birds, though breeding birds become reddish on the underside of the throat. The back, rump, and tail are streaked with gray and dark brown, sometimes with a rusty hue. In adult pelicans, the breast and belly are a blackish-brown and the legs and feet are black. The juvenile is similar but has a brownish-gray neck and white underparts.

This bird is readily distinguished from the American White Pelican by its non-white plumage, smaller size and its habit of diving for fish from the air, as opposed to co-operative fishing from the surface. The Peruvian Pelican, previously considered a subspecies of Brown Pelican, is now considered to be a separate species. It has very similar plumage to the Brown, but it is noticeably larger. The Brown and Peruvian pelicans may overlap in some areas along the Pacific coast of South America.

The Brown Pelican lives on both coasts in the Americas. On the Atlantic Coast and Gulf Coast they distribute from Nova Scotia to Venezuela, and to the mouth of the Amazon River. Along the Atlantic, they are usually less common north of the Carolinas, with a considerable population in much of the Gulf of Mexico. On the Pacific Ocean they are found from British Columbia to south central Chile, and including the Galapagos Islands. In the Pacific, they are fairly common along the coast of California, Mexico and Central America. Some immature birds may stray to inland freshwater lakes. After nesting, North American birds move in flocks further north along the coasts, returning to warmer waters for winter. They are also common in mangrove swamps.

Pelicans are very gregarious birds; they live in flocks of both sexes throughout the year. They are exceptionally buoyant due to the internal air sacks beneath their skin and in their bones, and as graceful in the air as they are clumsy on land. In level flight, pelicans fly in groups, with their heads held back on their shoulders, the bills resting on their folded necks. They may fly in a "V", but usually in regular lines or single file, often low over the water's surface.

When foraging, pelicans may fly a few feet or a considerable height over a school of fish and dive at high speed into the water, often submerging completely below the surface momentarily as they snap up prey. Upon surfacing they spill the water from the throat pouch before swallowing their catch. Only the Peruvian Pelican shares this active foraging style, while other pelicans forage more inactively by scooping up corralled fish while swimming on the surface of the water. Juvenile brown pelicans have been observed foraging in the surface-swimming matter of other pelicans. They are occasional targets of Kleptoparasitism by other fish-eating birds such as gulls, skuas and frigatebirds. 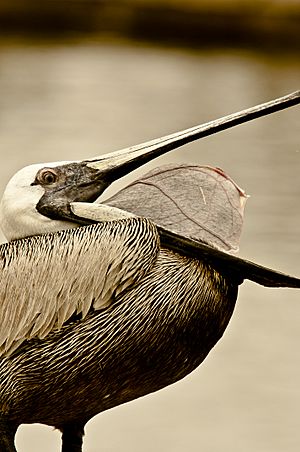 Although the Brown Pelican eats mostly fish, an occasional amphibian or crustacean may supplement the diet. Menhaden may locally account for 90–95% of their food. The anchovy supply is particularly important to the nesting success of the Brown Pelican. However, their preferred prey are usually not commercially fished species. Other fish preyed on with some regularity can include pigfish, pinfish, herring, sheepshead, silversides, mullet, and minnows, and they sometimes eat crustaceans, usually prawns. A single adult pelican can eat up to 1.8 kg (4.0 lb) each day. Today, in many coastal areas, Brown Pelicans will loaf around fishing ports and piers in hopes of being fed or stealing scraps of fish, especially if conditioned to do.

These birds nest in colonies, often on islands and/or in mangroves. Male pelicans pick out the nesting sites and perform an "advertising" display which attracts the females. Once a pair forms a bond, overt communication between them is minimal. Pelican nesting peaks during March and April; nests are in colonies either in trees, bushes, or on the ground (the latter usually on islands that terrestrial predators cannot access). Those placed in trees are rather flimsy and made of reeds, grasses, straw, and sticks; if on the ground, nests consist of a shallow scrape lined with feathers and a rim of soil built 10–26 cm (3.9–10.2 in) above the ground. Their young are hatched in broods of about 2–3 and are naked and helpless upon hatching. Incubation is roughly 28–30 days. Both parents actively care for the young. Young pelicans start to walk independently at about 35 days old in ground nest, but do not leave treetop nests for up to 68–88 days. In the 8–10 month period they are cared for, the nestling pelicans are fed by regurgitation around 70 kg (150 lb) of fish. The younger birds reach sexual maturity (and full adult plumage) at anywhere from two to five years of age. Predation is occasional at colonies and predators of eggs, young and the rare adult pelicans can include gulls, raptors (especially bald eagles), foxes, skunks and feral cats. In areas where their ranges' overlap, American alligators may sometimes pick off fledging pelicans. Predation is likely reduced if the colony is on an island. Like all pelicans, Brown Pelicans are highly sensitive to disturbances by humans (often tourists or fishermen) at their nest and may abandon their nest if stressed as such. Due to their size, the non-nesting adults are rarely predated. 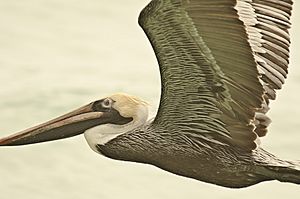 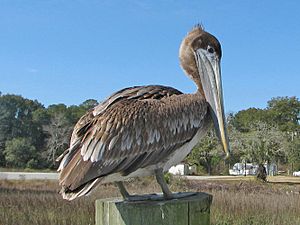 Pesticides like DDT and dieldrin threatened the Brown Pelican's future in the southeast United States and California in the early 1970s. Pesticides also threatened the pelican population in Florida in this period. A research group from the University of Tampa headed by Dr. Ralph Schreiber conducted research in the Tampa Bay/St Petersburg area and found that DDT caused the pelican eggshells to be too thin and incapable of supporting the embryo to maturity. As a result of this research, DDT usage was eliminated in Florida, followed by the rest of the US. Along with the American White Pelican, the Brown Pelican is protected by the Migratory Bird Treaty Act of 1918.

The International Union for Conservation of Nature's Red List has listed the Brown Pelican as Least Concern since 1988. The US government imposed a ban on the use of DDT in 1972. Since then, the population of Brown Pelican has increased. Current estimates place the population at 650,000 individuals.

The Brown Pelican is now a staple of crowded coastal regions and is tolerated to varying degrees by fishermen and boatmen. It is the national bird of Barbados and the Turks and Caicos Islands, and state bird of Louisiana. It is also one of the mascots of Tulane University and is on the seals of Tulane University, Louisiana State University and the University of Louisiana at Lafayette. It is also on the Crest of the University of the West Indies. A brown pelican (voiced by Geoffrey Rush in an Australian accent) was as illustrated as a friendly, virtuous talking character named Nigel in the animated children's film Finding Nemo, set in the Pacific Ocean near Australia, although only the white Australian Pelican is known to occur in that country.

All content from Kiddle encyclopedia articles (including the article images and facts) can be freely used under Attribution-ShareAlike license, unless stated otherwise. Cite this article:
Brown pelican Facts for Kids. Kiddle Encyclopedia.