Seal of Louisiana facts for kids 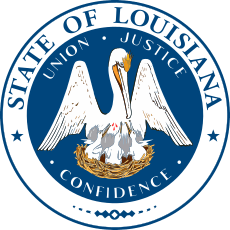 It has four pelicans (one adult, the other three are little). Mother Pelican wounds her breast to feed her young. "Union, justice, confidence" are the words of the motto surrounding these four pelicans.

The wording "State of Louisiana" is on the outer edge of the seal.

All content from Kiddle encyclopedia articles (including the article images and facts) can be freely used under Attribution-ShareAlike license, unless stated otherwise. Cite this article:
Seal of Louisiana Facts for Kids. Kiddle Encyclopedia.