Dieldrin is a chlorinated hydrocarbon originally produced in 1948 by J. Hyman & Co, Denver, as an insecticide. Dieldrin is closely related to aldrin. Aldin reacts further to form dieldrin. Aldrin is not toxic to insects; it is oxidized in the insect to form dieldrin which is the active compound. Both dieldrin and aldrin are named after the Diels-Alder reaction which is used to form aldrin from a mixture of norbornadiene and hexachlorocyclopentadiene.

Dieldrin was developed as an alternative to DDT and has proved to be a highly effective insecticide. It was very widely used during the 1950s to early 1970s. Endrin is a stereoisomer of dieldrin.

However, it is an extremely persistent organic pollutant; it does not degrade easily. Furthermore it tends to biomagnify as it is passed along the food chain. Long-term exposure has proven toxic to a very wide range of animals including humans. For this reason it is now banned in most of the world.

Dieldrin is listed in the Stockholm Convention on Persistent Organic Pollutants.

It can be formed from the synthesis of hexachloro-1,3-cyclopentadiene with norbornadiene in a Diels-Alder reaction, followed by epoxidation of the norbornene ring. 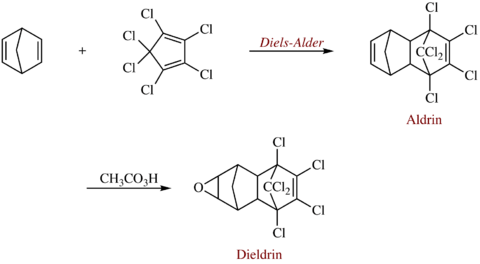 Synthesis of Dieldrin via a Diels-Alder reaction

Dieldrin is named after Otto Paul Hermann Diels, the co-inventor of the Diels-Alder reaction.

All content from Kiddle encyclopedia articles (including the article images and facts) can be freely used under Attribution-ShareAlike license, unless stated otherwise. Cite this article:
Dieldrin Facts for Kids. Kiddle Encyclopedia.