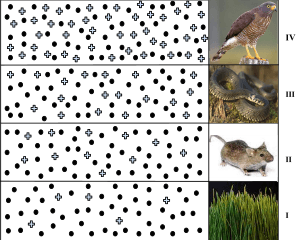 In biomagnification the concentration of the persistent toxins (crosses) increases higher up the food chain. 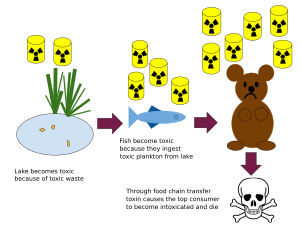 In this scenario, a pond has been intoxicated. As we go further into the food chain, the toxin concentration increases, causing the top consumer to eventually die of intoxication.

Biomagnification, also known as bioamplification or biological magnification, is any concentration of a toxin, such as pesticides, in the tissues of tolerant organisms at successively higher levels in a food chain. This increase can occur as a result of:

Biological magnification often refers to the process whereby certain substances such as pesticides or heavy metals work their way into lakes, rivers and the ocean, and then move up the food chain in progressively greater concentrations as they are incorporated into the diet of aquatic organisms such as zooplankton, which in turn are eaten perhaps by fish, which then may be eaten by bigger fish, large birds, animals, or humans. The substances become increasingly concentrated in tissues or internal organs as they move up the chain. Bioaccumulants are substances that increase in concentration in living organisms as they take in contaminated air, water, or food because the substances are very slowly metabolized or excreted. 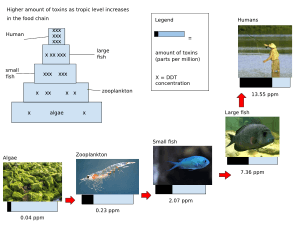 All content from Kiddle encyclopedia articles (including the article images and facts) can be freely used under Attribution-ShareAlike license, unless stated otherwise. Cite this article:
Biomagnification Facts for Kids. Kiddle Encyclopedia.