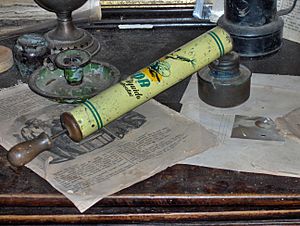 An insecticide is a pesticide whose purpose is to kill or to prevent the multiplication of insects.

Insecticides are very widely used in agriculture, as well as in people's dwellings and workplaces. The use of insecticides is one of the major causal factors behind the increase in agricultural productivity in the 20th century.

A series of classes of insecticides have existed, as time progressed one class has largely replaced the one before it. These trends in the classes of compounds in some ways has mirrored the development of chemical warfare agents.

Heavy metals, eg lead, mercury, arsenic and plant toxins such as nicotine have been used for many years. Various plants have been used as insecticides for centuries, including tobacco and pyrethrum.

One of the bigger drivers in the development of new insecticides has been the desire to replace toxic and irksome insecticides. The now notorious DDT was introduced as a safer alternative to the lead and arsenic compounds which had been used before. It is the case that when used under the correct conditions that almost any chemical substance is 'safe', but when used under the wrong conditions even the ' safest ' substance can be a threat to life, limb and/or the environment. 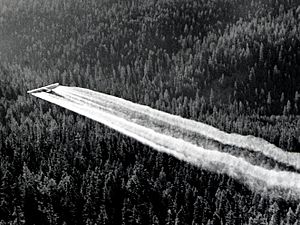 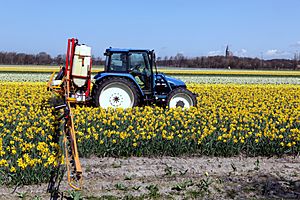 Plants being treated with insecticide

Some insecticides have been banned due to the fact that they are persistent toxins which have adverse effects on animals and/or humans. A classic example which is often quoted is DDT. One of the better known impacts of DDT is to reduce the thickness of the egg shells on predatory birds. The shells sometimes become too thin to be viable, causing reductions in bird populations. The near-worldwide ban on agricultural use of DDT and related chemicals has allowed some birds such as the peregrine falcon to recover in recent years.

Lindane and other insecticides have had to be used as an alternative to DDT because the population of insects have become resistant to DDT.

On the other hand the thoroughly nasty longlived organochlorine Dieldrin if used with care can prevent termites from destroying the telephone cables, but it is clearly not suitable for aerial spraying to control insects in a field close to a school playground. 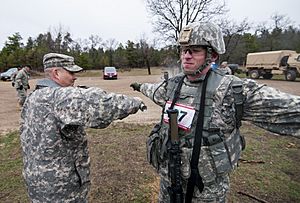 Getting sprayed with bug repellent

Personal insecticide, commonly referred to as "bug spray", typically comes in a plastic bottle or aerosol can. Applied to clothing, arms, legs, and other extremities, the use of this pesticide will either ward off or kill nearby insects.

Insecticide used for killing pests most often insects, and arachnids primarily comes in an aerosol can, and is sprayed into the air or nest as a means of killing the animal. Fly sprays will kill house flies, blowflies, ants, cockroaches and other insects and also spiders.

Active ingredients of most bug sprays include permethrin and tetramethrin, which act on the nervous system of insects and arachnids.

Bug spray should be used in well ventilated areas only, as the chemicals contained in the aerosol and pesticide can be harmful or deadly to humans.

All content from Kiddle encyclopedia articles (including the article images and facts) can be freely used under Attribution-ShareAlike license, unless stated otherwise. Cite this article:
Insecticide Facts for Kids. Kiddle Encyclopedia.