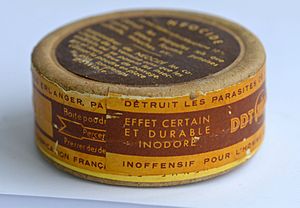 DDT was sold in boxes such as this one 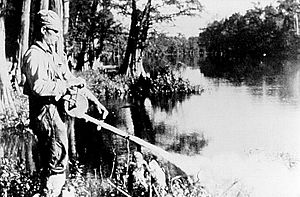 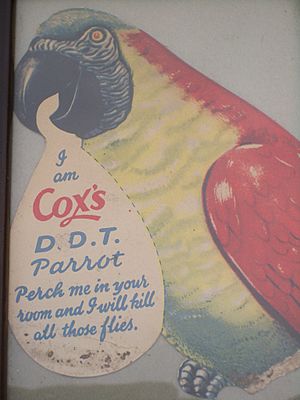 A piece of cardboard soaked with DDT, for use indoors. Seen in Australia, 2008

DDT is a well-known pesticide. The abbreviation stands for Dichloro-Diphenyl-Trichloroethane, one of its names. The Swiss chemist Paul Hermann Müller was awarded the Nobel Prize in Physiology or Medicine in 1948, for his discovery. In the 1960s there was a study that questioned if it was good to spread large amounts of DDT indiscriminately. The study also found that DDT could cause cancer. DDT is also highly poisonous to birds and other animals further up the food chain. This is why DDT was replaced by other pesticides. The Stockholm Convention which took effect in 2004, restricts the use of DDT to vector control. The convention does not affect the use of DDT for public health issues. This is because there are very few affordable alternatives. DDT is still widely used in India, North Korea and possibly elsewhere.

All content from Kiddle encyclopedia articles (including the article images and facts) can be freely used under Attribution-ShareAlike license, unless stated otherwise. Cite this article:
DDT Facts for Kids. Kiddle Encyclopedia.