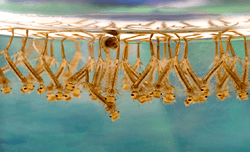 Larvae of a Culex mosquito

A mosquito is a type of fly. It is the common name of a family of flies in the order Diptera.

The females are ectoparasites: they land on warm-blooded animals, pierce a capillary, and inject saliva to stop the blood coagulating. Then they suck up and eat the blood. Deadly microscopic parasites often live in the saliva.

The males are nectar-feeders, and so are the females. However, in preparation for egg-laying the females turn to blood for its protein.

The oldest known mosquito with a basically modern anatomy was found in 79-million-year-old Canadian amber from the Upper Cretaceous. An older sister species with more primitive features was found in amber that is 90 to 100 million years old.

They lay their eggs in pools of water. The larvae move around near the surface of the water, breathing through air tubes that stick out of the water. They get their food from the water, usually eating algae and other tiny creatures. They like to wiggle around near the surface, which is why some people call them wigglers. The larvae usually enter the pupa stage within a few days or weeks of hatching, depending on the water temperature and the species.

The pupae are called tumblers because they tumble in the water if the water is touched. Tumblers do not eat, but they move around in the water a lot, and like larvae, they breathe from tubes that stick out of the water. The pupa stage is short (only for a few days), and then the mosquito becomes an adult.

There are many species of mosquito. This comes about because, of those which suck blood, each species is adapted to a different host or group of hosts. There are two subfamilies, 43 genera and over 3,500 species of the Culicidae.

Mosquitoes are a vector (carrier) which carries disease-causing viruses and parasites from person to person.

The principal mosquito borne diseases are the viral diseases yellow fever, dengue fever and malaria carried by the genera Anopheles and Culex. Mosquitoes transmit disease to more than 700 million people annually in Africa, South America, Central America, Mexico and much of Asia with millions of resulting deaths. 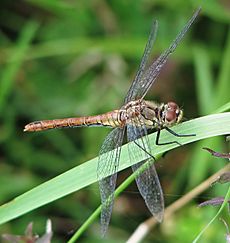 Dragonflies are natural predators of mosquitoes.

Methods used to prevent the spread of disease, or to protect individuals in areas where disease is endemic include:

Standing water, as in a pond or lake, is the main breeding ground. It may or may not be practical to eliminate this water. The water in bird baths can be changed once a week, but one can hardly do that with larger bodies of water. The method used to be: spray water with DDT, but that does a lot of damage, and in any event the mosquito is now highly resistant to the chemical.

With increasing reports of the harmful effects DEET has on humans, there has been a move to repellents which are organic. These are of the kind that have had traditional household purposes before their being used as mosquito repellents.

The dragonfly nymph eats mosquitoes at all stages of development and is quite effective in controlling populations. Some copepods are predators on first instar larvae, killing up to 40 Aedes larvae per day. A number of fish eat mosquito larvae, including goldfish, catfish, piranhas, and minnows. 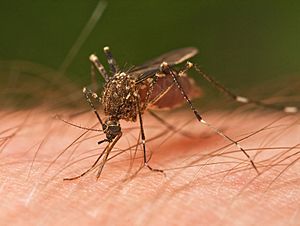 Visible, irritating bites are due to an immune response from the binding of IgG and IgE antibodies to antigens in the mosquito's saliva. Some of the sensitizing antigens are common to all mosquito species, whereas others are specific to certain species. There are both immediate hypersensitivity reactions (types I and III) and delayed hypersensitivity reactions (type IV) to mosquito bites. Both reactions result in itching, redness and swelling. Immediate reactions develop within a few minutes of the bite and last for a few hours. Delayed reactions take around a day to develop, and last for up to a week.

Several anti-itch medications are commercially available, including those taken orally, such as diphenhydramine, or topically applied antihistamines and, for more severe cases, corticosteroids, such as hydrocortisone and triamcinolone. A common topical remedy in camping gear is aqueous ammonia.

Both topical heat and cool may be useful to treat mosquito bites.

All content from Kiddle encyclopedia articles (including the article images and facts) can be freely used under Attribution-ShareAlike license, unless stated otherwise. Cite this article:
Mosquito Facts for Kids. Kiddle Encyclopedia.