Goldfish (Carassius auratus) are a species of domesticated fish. Goldfish belong to the carp family and were domesticated in China in the Tang Dynasty. They can reach up to 59 cm in size, and 3 kg in weight. However, most goldfish grow to only half that size. In captivity, goldfish can live for up to 30 years. In the aquarium, however, most will die earlier. This is because the aquarium is too small. Goldfish need a lot of space so they have room to swim and so the water does not get dirty too fast. Goldfish live best in temperatures between 10 degrees celsius and 30 degrees celsius.

It was once thought that goldfish have short memories, but scientists have proven that this is not true. In experiments, a goldfish was trained to kick a small ball under water. Another goldfish learned to swim through a maze.

There are many kinds of goldfish. The most common kind is golden-colored, but goldfish come in many different shapes and sizes. Many gold fish have fancy tails. Another common kind is called a black moor, which is black colored. Wild goldfish are called prussian carp and are silver-green in colour. 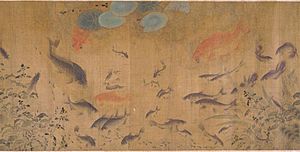 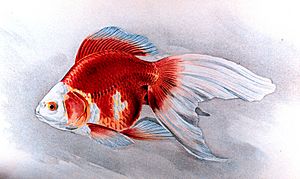 Ryukin goldfish, Plate XIX in: Goldfish and Their Culture in Japan, by Shinnosuke Matsubara.

Starting in ancient China, various species of carp (collectively known as Asian carp) have been bred and reared as food fish for thousands of years. Some of these normally gray or silver species have a tendency to produce red, orange or yellow colour mutations; this was first recorded during the Jin dynasty (265–420).

During the Tang dynasty (618–907), it was popular to raise carp in ornamental ponds and watergardens. A natural genetic mutation produced gold (actually yellowish orange) rather than silver colouration. People began to breed the gold variety instead of the silver variety, keeping them in ponds or other bodies of water. On special occasions at which guests were expected, they would be moved to a much smaller container for display.

By the Song dynasty (960–1279), the selective domestic breeding of goldfish was firmly established. In 1162, the empress of the Song Dynasty ordered the construction of a pond to collect the red and gold variety. By this time, people outside the imperial family were forbidden to keep goldfish of the gold (yellow) variety, yellow being the imperial colour. This is probably the reason why there are more orange goldfish than yellow goldfish, even though the latter are genetically easier to breed. The occurrence of other colours (apart from red and gold) was first recorded in 1276. 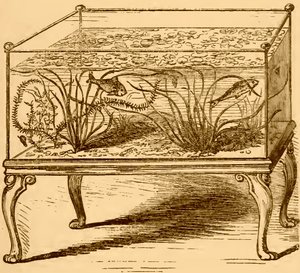 During the 1620s, goldfish were highly regarded in southern Europe because of their metallic scales, and symbolised good luck and fortune. It became tradition for married men to give their wives a goldfish on their first anniversary, as a symbol for the prosperous years to come. This tradition quickly died, as goldfish became more available, losing their status. Goldfish were first introduced to North America around 1850 and quickly became popular in the United States.

As of April 2008, the largest goldfish in the world was believed by the BBC to measure 19 inches (48 cm), and be living in the Netherlands. At the time, a goldfish named "Goldie", kept as a pet in a tank in Folkestone, England, was measured as 15 inches (38 cm) and over 2 pounds (0.91 kg), and named as the second largest in the world behind the Netherlands fish. The secretary of the Federation of British Aquatic Societies (FBAS) stated of Goldie's size that "I would think there are probably a few bigger goldfish that people don't think of as record holders, perhaps in ornamental lakes". In July 2010, a goldfish measuring 16 inches (41 cm) and 5 pounds (2.3 kg) was caught in a pond in Poole, England, thought to have been abandoned there after outgrowing a tank.

Goldfish have one of the most studied senses of vision in fish. Goldfish have four kinds of cone cells, which are respectively sensitive to different colours: red, green, blue and ultraviolet. The ability to distinguish between four different primary colours classifies them as tetrachromats.

Goldfish have strong associative learning abilities, as well as social learning skills. In addition, their visual acuity allows them to distinguish between individual humans. Owners may notice that fish react favorably to them (swimming to the front of the glass, swimming rapidly around the tank, and going to the surface mouthing for food) while hiding when other people approach the tank. Over time, goldfish learn to associate their owners and other humans with food, often "begging" for food whenever their owners approach.

Goldfish that have constant visual contact with humans also stop considering them to be a threat. After being kept in a tank for several weeks, sometimes months, it becomes possible to feed a goldfish by hand without it shying away.

Goldfish have a memory-span of at least three months and can distinguish between different shapes, colours and sounds. By using positive reinforcement, goldfish can be trained to recognize and to react to light signals of different colours or to perform tricks. Fish respond to certain colours most evidently in relation to feeding. Fish learn to anticipate feedings provided they occur at around the same time every day.

Goldfish are gregarious, displaying schooling behaviour, as well as displaying the same types of feeding behaviours. Goldfish may display similar behaviours when responding to their reflections in a mirror.

Goldfish have learned behaviours, both as groups and as individuals, that stem from native carp behaviour. They are a generalist species with varied feeding, breeding, and predator avoidance behaviours that contribute to their success. As fish they can be described as "friendly" towards each other. Very rarely does a goldfish harm another goldfish, nor do the males harm the females during breeding. The only real threat that goldfish present to each other is competing for food. Commons, comets, and other faster varieties can easily eat all the food during a feeding before fancy varieties can reach it. This can lead to stunted growth or possible starvation of fancier varieties when they are kept in a pond with their single-tailed brethren. As a result, care should be taken to combine only breeds with similar body type and swim characteristics. 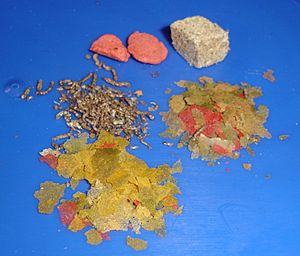 In the wild, the diet of goldfish consists of crustaceans, insects, and various plant matter. Like most fish, they are opportunistic feeders and do not stop eating on their own accord. Overfeeding can be deleterious to their health, typically by blocking the intestines. This happens most often with selectively bred goldfish, which have a convoluted intestinal tract. When excess food is available, they produce more waste and faeces, partly due to incomplete protein digestion. Overfeeding can sometimes be diagnosed by observing faeces trailing from the fish's cloaca.

Goldfish-specific food has less protein and more carbohydrate than conventional fish food. Enthusiasts may supplement this diet with shelled peas (with outer skins removed), blanched green leafy vegetables, and bloodworms. Young goldfish benefit from the addition of brine shrimp to their diet. As with all animals, goldfish preferences vary.

Goldfish may only grow to sexual maturity with enough water and the right nutrition. Most goldfish breed in captivity, particularly in pond settings. Breeding usually happens after a significant temperature change, often in spring. Males chase gravid female goldfish (females carrying eggs), and prompt them to release their eggs by bumping and nudging them.

Goldfish, like all cyprinids, are egg-layers. Their eggs are adhesive and attach to aquatic vegetation, typically dense plants such as Cabomba or Elodea or a spawning mop. The eggs hatch within 48 to 72 hours.

Within a week or so, the fry begins to assume its final shape, although a year may pass before they develop a mature goldfish colour; until then they are a metallic brown like their wild ancestors. In their first weeks of life, the fry grow quickly—an adaptation born of the high risk of getting devoured by the adult goldfish (or other fish and insects) in their environment.

Some highly selectively bred goldfish can no longer breed naturally due to their altered shape. The artificial breeding method called "hand stripping" can assist nature, but can harm the fish if not done correctly. In captivity, adults may also eat young that they encounter.

Breeding goldfish by the hobbyist is the process of selecting adult fish to reproduce, allowing them to reproduce and then raising the resulting offspring while continually removing fish that do not approach the desired pedigree. The process is described here in detail.

All content from Kiddle encyclopedia articles (including the article images and facts) can be freely used under Attribution-ShareAlike license, unless stated otherwise. Cite this article:
Goldfish Facts for Kids. Kiddle Encyclopedia.