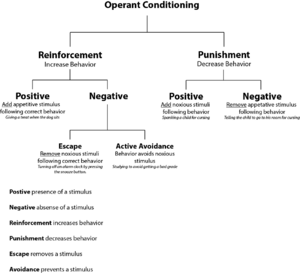 Operant conditioning is a form of learning. In it, an individual changes its behaviour because of the consequences (results) of the behaviour.

The person or animal learns its behaviour has a consequence. That consequence may be

There are four different contexts in operant conditioning. Here, the terms 'positive' and 'negative' are not used in their basic sense; positive means that something is added, and negative means something is taken away:

The idea of operant conditioning was first discovered by Edward Thorndike, and analyzed by B.F. Skinner.

Operant conditioning, sometimes called instrumental learning, was first studied by Edward L. Thorndike (1874–1949). He observed the behavior of cats trying to escape from home-made puzzle boxes. When first put in the boxes, cats took a long time to escape. With experience, successful responses occurred more frequently, enabling the cats to escape in less time. In his law of effect, Thorndike theorized that behaviours followed by satisfying consequences tend to be repeated, and those that produce unpleasant consequences are less likely to be repeated. In short, some consequences strengthened behavior and some consequences weakened behavior. Thorndike produced the first known learning curves by this procedure.

All content from Kiddle encyclopedia articles (including the article images and facts) can be freely used under Attribution-ShareAlike license, unless stated otherwise. Cite this article:
Operant conditioning Facts for Kids. Kiddle Encyclopedia.