Kids Encyclopedia Facts
Not to be confused with maize. 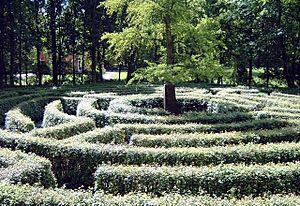 A maze made from hedges 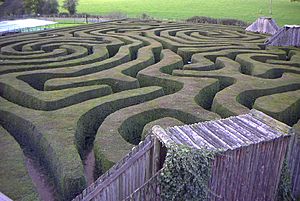 A hedge maze at Longleat stately home in England

A maze is a path or collection of paths, typically from an entrance to a goal. The word is used to refer both to branching tour puzzles through which the solver must find a route, and to simpler non-branching ("unicursal") patterns that lead unambiguously through a convoluted layout to a goal. (The term "labyrinth" is generally synonymous with "maze", but can also connote specifically a unicursal pattern.) The pathways and walls in a maze are typically fixed, but puzzles in which the walls and paths can change during the game are also categorised as mazes or tour puzzles. 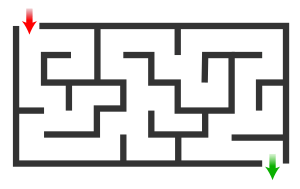 A small maze with one entrance and one exit

Mazes have been built with walls and rooms, with hedges, turf, corn stalks, hay bales, books, paving stones of contrasting colors or designs, and brick, or in fields of crops such as corn or, indeed, maize. Maize mazes can be very large; they are usually only kept for one growing season, so they can be different every year, and are promoted as seasonal tourist attractions. Indoors, mirror mazes are another form of maze, in which many of the apparent pathways are imaginary routes seen through multiple reflections in mirrors. Another type of maze consists of a set of rooms linked by doors (so a passageway is just another room in this definition). Players enter at one spot, and exit at another, or the idea may be to reach a certain spot in the maze. Mazes can also be printed or drawn on paper to be followed by a pencil or fingertip. Mazes can be built with snow.

Maze generation is the act of designing the layout of passages and walls within a maze. There are many different approaches to generating mazes, with various maze generation algorithms for building them, either by hand or automatically by computer.

There are two main mechanisms used to generate mazes. In "carving passages", one marks out the network of available routes. In building a maze by "adding walls", one lays out a set of obstructions within an open area. Most mazes drawn on paper are done by drawing the walls, with the spaces in between the markings composing the passages.

The mathematician Leonhard Euler was one of the first to analyze plane mazes mathematically, and in doing so made the first significant contributions to the branch of mathematics known as topology.

Mazes containing no loops are known as "standard", or "perfect" mazes, and are equivalent to a tree in graph theory. Thus many maze solving algorithms are closely related to graph theory. Intuitively, if one pulled and stretched out the paths in the maze in the proper way, the result could be made to resemble a tree.

Other types of mazes

Ball-in-a-maze puzzles
Dexterity puzzles which involve navigating a ball through a maze or labyrinth.

Block maze
A maze in which the player must complete or clear the maze pathway by positioning blocks. Blocks may slide into place or be added.

Hamilton maze
A maze in which the goal is to find the unique Hamiltonian cycle.

Linear or railroad maze
A maze in which the paths are laid out like a railroad with switches and crossovers. Solvers are constrained to moving only forward. Often, a railroad maze will have a single track for entrance and exit.

Logic mazes
These are like standard mazes except they use rules other than "don't cross the lines" to restrict motion.

Loops and traps maze
A maze that features one-way doors. The doors can lead to the correct path or create traps that divert you from the correct path and lead you to the starting point. The player may not return through a door through which he has entered, so dead ends may be created. The path is a series of loops interrupted by doors. Through the use of reciprocal doors, the correct path can intersect the incorrect path on a single plane. A graphical variant of this maze type is an arrow maze.

Number maze
A maze in which numbers are used to determine jumps that form a pathway, allowing the maze to criss-cross itself many times.

Picture maze
A standard maze that forms a picture when solved.

Turf mazes and mizmazes
A pattern like a long rope folded up, without any junctions or crossings.

All content from Kiddle encyclopedia articles (including the article images and facts) can be freely used under Attribution-ShareAlike license, unless stated otherwise. Cite this article:
Maze Facts for Kids. Kiddle Encyclopedia.