Valdosta is a city in and the county seat of Lowndes County, located on the southern border of Georgia, United States. As of 2013, Valdosta has a total population of 56,481 , and is the 14th largest city in Georgia.

Valdosta is the principal city of the Valdosta Metropolitan Statistical Area, which in 2010 had a population of 139,588. It includes part of Brooks County to the west.

Valdosta is the home of Valdosta State University, a regional university in the University System of Georgia with over 10,900 students. The local public Valdosta High School has the most winning football program of any high school in the United States.

Valdosta is called the Azalea City, as the plant grows in profusion there. The city hosts an annual Azalea Festival in March.

Valdosta was incorporated on December 7, 1860, when it was designated by the state legislature as the new county seat, formerly at nearby Troupville. The railroad was built to Valdosta that year, rather than Troupville, stimulating development in the new county seat. Many citizens of Troupville had already relocated to Valdosta when the Atlantic and Gulf Railroad was built four miles (about 6 km) away. On July 4, 1860, the engine known as Satilla No. 3 pulled the first train into Valdosta on the Atlantic and Gulf Railroad.

Valdosta is located in the coastal plain of Georgia and has a virtually flat landscape. It was once the center of long-staple cotton growing in the United States, a lucrative crop both before and after the Civil War. The county had a majority-white population well before the war with a substantial black population, as the cotton plantations were dependent on masses of enslaved field laborers.

The sixty miles (97 km) of railway between Valdosta and Waycross were once the longest straight stretch of railroad in the world. Today highways stretch through the county for miles with hardly a curve, rise, or fall.

After being bypassed by the railroad and losing the county seat, Troupville was virtually abandoned. It had been named after Governor George Troup, for whom Troup County, Georgia, was also named. Valdosta was named after Troup's plantation, Valdosta (occasionally the Val d'Osta spelling was used for the plantation). Troup had named it after the Valle d'Aosta in Italy. The name Aosta (Latin: Augusta), refers to Emperor Augustus. A long-standing rumor held that the city's name meant "vale of beauty."

The American Civil War erupted just months after the establishment of Valdosta. During the war, Valdosta was far away from battles and became a refuge for those fleeing areas of Georgia where the war was being activelly fought.

After the American Civil War, during the Reconstruction era more than 100 freedmen, families of farmers, craftsmen, and laborers, emigrated from Lowndes County to Arithington, Liberia, in 1871 and 1872, looking for a better life. Since before the war, the American Colonization Society had supported the relocation of free blacks to Liberia, an American colony in West Africa established for this purpose. The first group from Lowndes County left in 1871, and were led by Jefferson Bracewell; the second group was led in 1872 by Aaron Miller.

Many freedmen ended up working as sharecroppers and tenant farmers on area plantations in Lowndes County, as cotton agriculture continued well into the 20th century. As mechanization was introduced, the number of agricultural jobs decreased.

In 1910, cotton was still important to the economy and Fortune magazine ranked Valdosta as the richest city in America by per capita income. Soon after that, the boll weevil invaded the South, moving east through the states and killing much of the cotton crop in this area in 1917. Agriculture in this area turned to tobacco and pine timber.

In January 1913, the South Georgia State Normal College opened in Valdosta on the edge of town. Over the course of the following century, it evolved into Valdosta State University. The school gradually became a regional center of higher education that has drawn many to the city.

On June 26, 1941 Moody Army Airfield opened 10 miles (16 km) to north-east of the town as part of the United States' preparation for the country's potential involvement in World War II. Moody Air Force Base's role in World War II and the postwar era has influenced the growth of Valdosta.

The local economy received an important boost in the mid-20th century when Interstate 75 was routed and built through the area. Many vacationers on their way to Florida found Valdosta a convenient "last stop" on their way to Walt Disney World and the Orlando area. The Interstate's route to the west of the city has contributed to city's commercial district shifting from the historic downtown area to near the Interstate.

A high school oratory contest held in Valdosta in the mid-1950s is notable for its second-place winner, Martin Luther King Jr.. He later became a renowned minister and national civil rights leader.

According to the Bureau of Labor Statistics' Monthly Labor Review, the first automated teller machine (ATM) was installed at a C&S Bank in Valdosta in 1971. That ATM was preceded by one installed in Rockville Centre, New York in 1969.

Valdosta is about 230 miles (370 km) south of Atlanta. It is almost the same distance north of Orlando, Florida. It is 138 miles east of Dothan, Alabama and 137 miles west of Hinesville. Valdosta is approximately fifteen miles north of the state's border with Florida.

Valdosta has a humid subtropical climate (Köppen climate classification Cfa), with mild, dry/wet winters and hot, humid summers. Temperatures frequently go over 90 °F or 32.2 °C, but in extreme heatwaves, temperatures occasionally go over 100 °F or 37.8 °C. Snowfall is rare but not unknown. Snow has not been sighted in Valdosta since February 2010, with the last significant snowfall being 1989. However, light frosts regularly occur between December and February. Valdosta can experience Indian summers in the winter, where temperatures can get quite warm. Very rarely do winter lows go below 25 °F or −3.9 °C.

According to the Bureau of Census, the Valdosta, Georgia Metropolitan Statistical Area (MSA) had an estimated population of 135,804 and ranked #281 in the U.S. in 2009. (The MSA consists of Lowndes, Brooks, Lanier and Echols counties.) 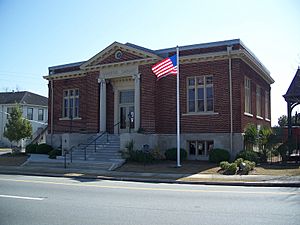 The Lowndes County Historical Society & Museum is located at the Carnegie Library of Valdosta, a National Register of Historic Places listed building and Carnegie library, one of 24 Carnegie Libraries in Georgia.

All content from Kiddle encyclopedia articles (including the article images and facts) can be freely used under Attribution-ShareAlike license, unless stated otherwise. Cite this article:
Valdosta, Georgia Facts for Kids. Kiddle Encyclopedia.