Tifton is a city in Tift County, Georgia, United States. The population was 16,350 at the 2010 census. The city is the county seat of Tift County.

The area's public schools are administered by the Tift County School District. Abraham Baldwin Agricultural College has its main campus in Tifton. Southern Regional Technical College and the University of Georgia also have Tifton campuses. 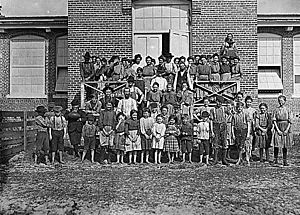 Tifton was founded in 1872 at an important railroad junction in Berrien County. The community was named for local sawmill owner Henry H. Tift. Tifton was incorporated as a city in 1890. In 1905, it was designated county seat of the newly formed Tift County.

Progress met the south when President Eisenhower called for a modern road system that would allow travelers to get from place to place safely and in record time: the interstate highways. The interstate was a major contributor to the demise of many downtowns. New areas of development came alongside these roadways as they were built.

Since World War II, many women had joined the workforce and did not have the time or luxury of staying home with children while father was at work. Quietly, the community's focus on town activities shifted from the town center to the new suburbs. Hotels were being built along the interstate to accommodate the travelers. Service stations and shopping areas were going where the development was occurring, on the interstate. The location along a major junction of highways made Tifton the ideal location for medical services serving a large (HSA 4140) geographic area.

Until recently, Tifton was the home of the world's second largest magnolia tree, which was located in Magnolia Tree Park. In 2004, the tree was burned in a fire. The cause of the fire has never been given by local authorities. Currently, the tree and observation area are blocked from visitors by a gate. Although it no longer grows, the tree still stands. It is not known where the new second largest magnolia tree resides.

The Georgia Museum of Agriculture & Historic Village, formerly known as Agrirama, is located in Tifton, Georgia. It opened on July 4, 1976. The grounds consist of five areas: a traditional farm community of the 1870s, an 1890s progressive farmstead, an industrial sites complex, rural town, and national peanut complex; and the Museum of Agriculture Center. Over 35 structures have been relocated to the 95-acre (380,000 m2) site and faithfully restored or preserved. Costumed interpreters explain and demonstrate the lifestyle and activities of this time in Georgia’s history. 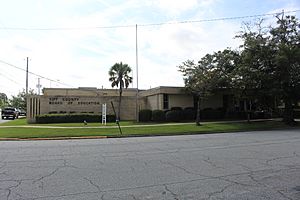 The Tift County School District holds pre-school to grade twelve, and consists of, eight elementary schools, two middle schools, one high school, and an alternative school. The district has 467 full-time teachers and over 7,641 students.

In 2010, the indoor football team Georgia Firebirds relocated from Waycross, Georgia to Tifton. 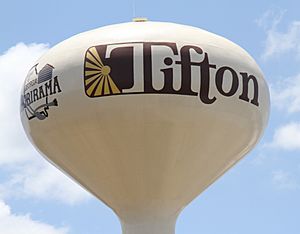 Tifton water tower seen from I-75

All content from Kiddle encyclopedia articles (including the article images and facts) can be freely used under Attribution-ShareAlike license, unless stated otherwise. Cite this article:
Tifton, Georgia Facts for Kids. Kiddle Encyclopedia.