A wide receiver (or WR, wideout) is an American football player whose main duty is to catch the football when it is thrown by the quarterback.

Wide receivers may also block, run with the football and sometimes throw the football besides just catching it. They can wear jersey numbers 10-19 and 80-89 in the National Football League, but there are no limits in college football.

An example of a typical wide receiver's positioning in an offensive formation: (L) in split end position, (R) in flanker position. 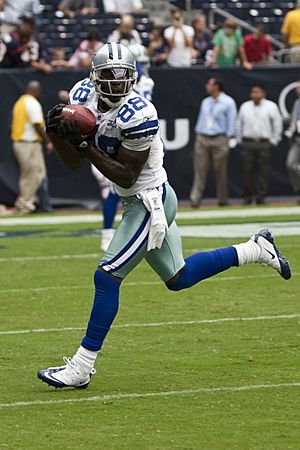 All content from Kiddle encyclopedia articles (including the article images and facts) can be freely used under Attribution-ShareAlike license, unless stated otherwise. Cite this article:
Wide receiver Facts for Kids. Kiddle Encyclopedia.