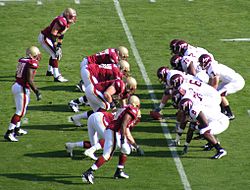 Two college football linebackers (MLB and LOLB) backing up their defensive line while the ROLB (front, upright) threatens to blitz, or rush the passer.

A linebacker is a defensive position in the game of American football. There are two kinds of linebackers. One is the outside linebacker (OLB), whose job is to tackle players, rush the passer, and sometimes drop back in coverage to prevent catches. The middle linebacker (MLB) is often called the "quarterback of the defense," as they direct many formations and are often looked up to as leaders and very good players, mostly handling the job of tackling as well.

Linebackers can appear in different formations, or looks. In a 4-3 defense, there are three linebackers; usually two OLBs and a MLB in the middle.

All content from Kiddle encyclopedia articles (including the article images and facts) can be freely used under Attribution-ShareAlike license, unless stated otherwise. Cite this article:
Linebacker Facts for Kids. Kiddle Encyclopedia.