Thomasville is the county seat of Thomas County, Georgia, United States. The city is the second largest in Southwest Georgia after Albany.

The city deems itself the City of Roses and holds an annual Rose Festival. The city features plantations open to the public, a historic downtown, a large farmer's market, and a 308-year-old oak tree at the corner of Monroe and Crawford streets. The population was 19,340 at the 2013 census.

In 2016, Thomasville was featured as the second best historic small town on USA Today's 10 Best List Reader's Choice after Bisbee (Arizona) but ahead of Abingdon (Virginia), Mackinac Island (Michigan), and Astoria (Oregon).

Thomasville was founded in 1825 as seat of the newly formed Thomas County. It was incorporated as a town in 1831 and as a city in 1889. The community was named for Jett Thomas, a general in the War of 1812. 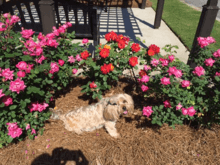 Thomasville plants and maintains more than 1,000 roses located throughout the city, as do a number of residents who have their own rose gardens. During the last week of April, rose growers from all over the world display their prize roses for a panel of judges. The Thomasville Rose Garden at Cherokee Lake Park is the largest of 85 rose beds maintained by the city, and is host to the annual rose festival.

Thomasville is home to several historic and cultural organizations, including the Thomas County Historical Society and Museum of History, Thomasville Landmarks, Inc. the Thomasville Center for the Arts, Jack Hadley's Black History Museum, and Pebble Hill Plantation. Daily tours and research hours are available at each institution.

The climate in this area is characterized by hot, humid summers and generally mild to cool winters. According to the Köppen Climate Classification system, Thomasville has a humid subtropical climate, abbreviated "Cfa" on climate maps.

There were 7,021 households out of which 30.8% had children under the age of 18 living with them, 39.7% were married couples living together, 22.7% had a female householder with no husband present, and 33.7% were non-families. 29.7% of all households were made up of individuals and 12.7% had someone living alone who was 65 years of age or older. The average household size was 2.47 and the average family size was 3.06.

The city has installed a fiber optic network, known as CNS, which provides affordable, high speed Internet access. The city's network has been in place since 1999. The city transfers excess revenues from CNS services and from its other utilities to the city's general fund to pay for police and fire protection, street maintenance, and other essential services. In 2012, because of these revenues, the city was able to eliminate property fire tax for its residents and businesses.

All content from Kiddle encyclopedia articles (including the article images and facts) can be freely used under Attribution-ShareAlike license, unless stated otherwise. Cite this article:
Thomasville, Georgia Facts for Kids. Kiddle Encyclopedia.