Moultrie is the county seat and largest city of Colquitt County, Georgia, United States. It is the third largest city in Southwest Georgia, behind Thomasville and Albany. As of the 2010 census, Moultrie's population was 14,268. It was originally known as Ochlockoney until it was incorporated by the Georgia General Assembly in 1859. Moultrie is an agricultural community set in the Southern Rivers part of Georgia. It is well known for its antique shops and has been styled "The Antique Capital of South Georgia". Moultrie is the home of Former US Senator Saxby Chambliss. Downtown Moultrie contains the Moultrie Commercial Historic District, listed on the National Register of Historic Places. The district includes the Colquitt Theatre.

Located in southwest Georgia, Moultrie is in the center of Colquitt County, 24 miles (39 km) west of Interstate 75, and about 200 miles (300 km) south of Atlanta and 60 miles (100 km) northeast of Tallahassee, Florida. The city is located between Albany to the northwest, Tifton to the northeast, Thomasville to the southwest, and Valdosta to the southeast.

The city was named after Gen. William Moultrie, the Revolutionary War hero after whom Fort Moultrie was named following the successful defense of Charleston, South Carolina, against the British under Peter Parker, an anniversary subsequently celebrated as Carolina Day.

Colquitt County became the 115th county in Georgia by an act of the Legislature on February 25, 1856. It was named after Walter Terry Colquitt, a minister, statesman and lawyer who was a military leader in the mid-1860s. In 1879, a charter was adopted and 50 acres (0 km2) in the center of the county was declared the county seat.

Founders of naval stores started harvesting the timbers in the late 1890s. They set up turpentine stills and built tram roads, allowing for the railroad to come into the territory. The Boston & Albany line, which later became the Georgia Northern Railway, was the first through town, bringing with it growth and prosperity for the county. Practically every train brought new residents interested in supplying naval stores or working in the sawmills.

By 1900, through the work of businessmen, bankers and speculators, the county was becoming a farmer's paradise.

Land was cleared and development companies began dividing the forested area into farm tracts. Experienced farmers from north Georgia and the Carolinas were invited to come and develop the land. The county's agriculture industry thrives today.

Moultrie Commercial Historic District is a historic area of Moultrie with several buildings of historical significance including the Moultrie Colquitt Towers, formerly a hotel called Hotel Colquitt. The district was listed on the National Register of Historic Places on June 3, 1994. The area is generally bounded by northeast First Avenue, southeast Second Avenue, West First Street and East Fourth Street. 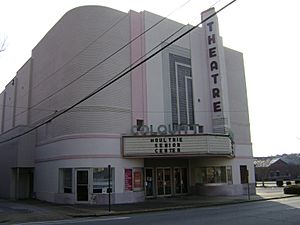 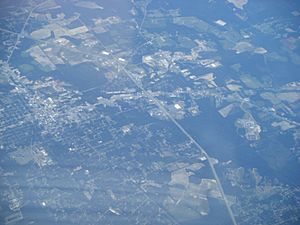 The African American community has made a significant impact on the city of Moultrie over the years. Several of those making the most impact have been honored by having community buildings or parks bear their names. Former city councilman and mayor pro-tem, H. Wesley Ball's service to the African American community is commemorated by a [1] park bearing his name. Ball served as city councilman of Moultrie from 1979 to 1991. The park was built then dedicated to his memory due largely to his contributions through the years to the growth and prosperity of his community and the city of Moultrie.

Another late Moultrie resident has had a railway terminal in the Atlanta area named in his honor. In 2001, the John W. Whitaker Inter-modal Terminal in Austell was named for John Whitaker, a Moultrie native who worked with Norfolk Southern most of his lifetime. Whitaker helped to form the International Brotherhood of Railroad Employees to address workplace discrimination. He also trained as a pilot with the famed Tuskegee Airmen during World War II, but his training was not completed by the time the war ended in 1945.

A section of Ninth Street Northwest was named in honor of Moultrie native, Ellis Hanks Jr. in 2003. Hanks received the Navy and Marine Corps Medal, which is the highest award given to a Marine for heroism in a non-combat situation. He was also the first American to receive the Finnish Life Saving Award.

Both of Moultrie's middle schools bear the names of successful black educators. C.A. Gray Junior High School was named forward r Charlie A. Gray, a faculty member at Moultrie High for Negro Youth and Willie J. Williams Middle School in honor of its former principal. Moultrie also hosts the "Ram Round-up". The Round-up is a yearly conglomerate of the class reunions of the formerly segregated African American high schools of Colquitt County from the 1920s to the 1970s. It is held during the 4th of July holiday week. This gathering has been lauded for garnering much attention to the achievements of its black alumni and for boosting the local economy. The theme is "A History..A Celebration" and includes former schools:

There are two radio and three television stations located in Moultrie.

Moultrie is served by US 319, which connects to Interstate 75 and Interstate 10. State Road 37 and State Road 111 also run through Moultrie. Moultrie has two public airports used primarily for general aviation, Moultrie Municipal Airport and Spence Airport.

The climate in this area is characterized by relatively high temperatures and evenly distributed precipitation throughout the year. According to the Köppen Climate Classification system, Moultrie has a humid subtropical climate, abbreviated "Cfa" on climate maps.

Moultrie public schools are controlled by the Colquitt County Board of Education. The Colquitt County School District holds grades pre-school to grade twelve, consisting of ten elementary schools, a middle school, a junior high school, and one high school. As of Nov. 27th, 2020, the district has more than 9,100 students and 1,351 staff, which includes both certified and classified staff.

Moultrie is served by US 319, which connects to Interstate 75 and Interstate 10. State Road 37 and State Road 111 also run through Moultrie. Moultrie has two public airports used primarily for general aviation, Moultrie Municipal Airport and Spence Airport.

All content from Kiddle encyclopedia articles (including the article images and facts) can be freely used under Attribution-ShareAlike license, unless stated otherwise. Cite this article:
Moultrie, Georgia Facts for Kids. Kiddle Encyclopedia.