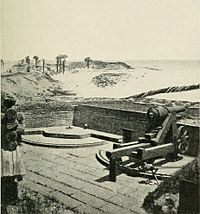 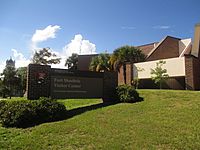 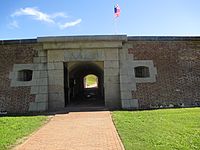 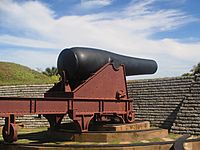 Fort Moultrie is a series of fortifications on Sullivan's Island, South Carolina, built to protect the city of Charleston, South Carolina. The first fort, formerly named Fort Sullivan, built of palmetto logs, inspired the flag and nickname of South Carolina, as "The Palmetto State". The fort was renamed for the U.S. patriot commander in the Battle of Sullivan's Island, General William Moultrie. During British occupation, in 1780–1782, the fort was known as Fort Arbuthnot.

South Carolina patriots began to build a fort to guard Charleston, South Carolina, harbor in 1776. British Admiral Sir Peter Parker with nine British warships attacked the fort—named Fort Sullivan and incomplete—on June 28, 1776, near the beginning of the American Revolutionary War. The soft palmetto logs did not crack under bombardment but rather absorbed the shot; cannonballs reportedly even bounced off the walls of the structure. William Moultrie, commander of the 2nd South Carolina Regiment, and his four hundred men fought a day-long battle that ended with the heavily damaged British ships being driven from the area. This victory galvanized the Patriots' cause for independence. The fort hence took its name Fort Moultrie in his honor. Charleston locals celebrate "Carolina Day" to commemorate the bravery of the defenders of the fort.

During this battle, Moultrie flew a flag of his own design, authorized by the colonial government. It was later called the Moultrie flag or Liberty flag and became iconic to the Revolution in the South.

The British eventually captured Fort Moultrie as part of the Siege of Charleston in spring 1780 and renamed it Fort Arbuthnot. Nevertheless, the colonists won the war, and British troops departed in 1782, at which time the flag was presented in Charleston, by General Nathanael Greene, commander of the southern Regulars.

Great Britain and France began another war in 1793, heightening tensions. The United States of America thence embarked on a significant fortification program for important harbors, later called the First System of fortifications. Atop the decayed original Fort Moultrie, the Army completed a new fort in 1798; the Army also built nineteen other new forts along the Atlantic coast. The fort was garrisoned by Captain Jonathan Robeson's company in 1802. However, after years of neglect the Antigua–Charleston hurricane destroyed Fort Moultrie in 1804.

Fort Moultrie was rebuilt as part of the Second System of fortifications in 1808–09 under the direction of Army engineer Alexander Macomb. A report by the Secretary of War on fortifications in December 1811 describes Fort Moultrie as "an irregular form, built of brick, presenting a battery of three sides on the sea front, and the whole is enclosed with ramparts, parapets, &c. mounting 40 guns. … The barracks are of brick … for five hundred (soldiers)".

Fort Moultrie's main design did not change much over the next five decades. The Army altered the parapet and modernized the armament, but defense of Charleston centered increasingly around newly created Fort Sumter. By the time of the American Civil War, Fort Moultrie, Fort Sumter, Fort Johnson, and Castle Pinckney surrounded and defended Charleston.

For fifty years the Army detained Native American prisoners at Fort Moultrie. Seminole Indian fighter Osceola and some fellow Seminoles were captured in late 1837 and transferred to the fort. Osceola died of malaria in January 1838; the Army buried his corpse at the front gate of Fort Moultrie and thereafter maintained his grave.

In the months leading up to the Civil War John L. Gardner was in command at Fort Moultrie. With secession growing more imminent, Gardner had made several requests to Secretary of War John B. Floyd for more troops to garrison and defend the undermanned fortress. Each time his requests were ignored, as Floyd (who joined the Confederacy) was planning to hand the forts in Charleston Harbor over to the secessionists.

South Carolina seceded from the Union on December 20, 1860. Around this time a Federal garrison from the 1st US Artillery was sent to Fort Moultrie. Unlike the state militia at the other forts, the Regular Army defenders of Fort Moultrie chose not to surrender to the South Carolina forces. On December 26, 1860, Union Major Robert Anderson moved his garrison from Fort Moultrie to the stronger Fort Sumter. On February 8, 1861, South Carolina joined other seceded Deep Southern states to form the Confederate States of America. In April 1861, Confederate troops shelled Fort Sumter into submission and the American Civil War began.

The Army modernized Fort Moultrie in the 1870s with new weapons and deep concrete bunkers. Weapons of this period included 15-inch and 10-inch Rodman guns, which were smoothbores, and 8-inch converted rifles, lined down from 10-inch Rodmans.

Beginning in 1897, Fort Moultrie's armament was modernized under the large-scale Endicott Program of coast defenses. Eight new reinforced-concrete batteries were completed by 1906, and part of the Second System fort was demolished to make room for batteries Bingham, McCorkle, and Lord. The fort also had a mine casemate to control a naval minefield. In 1901 Coast Artillery units were designated from heavy artillery units, and in 1907 the United States Army Coast Artillery Corps was formed to garrison the new coast defenses.

The Endicott Program batteries at Fort Moultrie were:

12-inch mortars in a pit; Battery Capron had four pits of this type 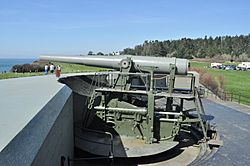 Battery Capron, with sixteen 12-inch mortars, was the largest component of the new defenses. In 1906 it was organizationally split into two batteries, Capron and Butler, each with eight mortars. Batteries Jasper and Thompson provided longer-range weapons with a total of six 10-inch disappearing guns. In April 1898 the Spanish–American War broke out, with Fort Moultrie's smaller, rapid-fire batteries still years from completion. Batteries Logan and Bingham were added to the fort, mostly equipped with weapons purchased from the United Kingdom. In 1901 Battery McCorkle was added to defend the minefield against minesweepers with three 3-inch guns on retractable masking parapet carriages. In 1905 Battery Lord was added with two 3-inch guns, and in 1906 Battery Gadsden provided four 6-inch rapid-fire disappearing guns.

These batteries were supplemented in 1899 by a pair of 12-inch guns at Fort Sumter. Forts Moultrie and Sumter constituted the Coast Defenses of Charleston, as the Charleston Coast Artillery District was designated in 1913.

In 1904 Battery Logan's 6-inch Armstrong gun was removed and most likely transferred to Fort Adams.

After the US entered World War I, Battery Gadsden's four 6-inch guns were removed for service on field carriages on the Western Front in 1917 and were never returned to the fort. Records show the guns arrived in France, but a history of the Coast Artillery in World War I states that none of the regiments in France equipped with 6-inch guns completed training in time to see action before the Armistice.

Two of Battery Jasper's four 10-inch guns were similarly removed in 1918 for potential use as railway guns; they were never returned to the fort but were replaced with guns from Fort Washington in 1919.

Following World War I there were several changes at Fort Moultrie as part of a forcewide partial disarmament of the coast defense system. Battery Bingham's two 4.7-inch Armstrong guns and Battery McCorkle's three 3-inch M1898 guns were removed in 1919–20 as part of a general removal from service of some gun types. Eight of Battery Capron-Butler's mortars were removed and the remaining eight replaced with M1890 mortars on M1896 carriages in 1920. The removal of half the mortars was a forcewide measure to increase the rate of fire by reducing overcrowding of mortar pits during reloading.

With the outbreak of World War II in 1939 and the Fall of France in 1940, a comprehensive upgrade of US coastal fortifications was implemented. In the early part of the war the Harbor Defenses of Charleston were garrisoned by the 13th Coast Artillery Regiment of the Regular Army and the 263rd Coast Artillery Regiment of the South Carolina National Guard. The Marshall Military Reservation, a sub-post of Fort Moultrie, was established in the northeast part of Sullivan's Island to accommodate the new batteries. The batteries built during World War II at and near Fort Moultrie were:

Additionally, a battery of two 16-inch guns designated BCN 125 was proposed for James Island, south of Charleston Harbor, but was never built. 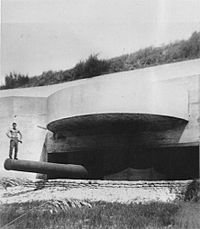 12-inch casemated gun, similar to those of BCN 520

The construction of the long-range BCN 520 with 12-inch guns rendered all previous gun defenses in the Charleston area obsolete. BCN 520 was armed with guns removed from Battery Kimble at Fort Travis, Galveston, Texas. Almost all of Fort Moultrie's previous armament was scrapped in 1942, except Battery Thompson's pair of 10-inch guns and Battery Lord's pair of 3-inch guns. The two fixed emplacements of AMTB 2A were built on the former 10-inch Battery Jasper. A Harbor Entrance Control Post (HECP) to coordinate Army and Navy harbor defenses was established at the old fort and has been refurbished as an exhibit.

On August 15, 1947, the Army lowered Fort Moultrie's flag for the last time and ended 171 years of service. After the war, due to changes in military technology, including submarines and nuclear weapons, seacoast defense of the United States ceased to be a viable strategy.

In 1960, the Department of Defense transferred Fort Moultrie to the National Park Service. NPS manages the historic fort as a unit of Fort Sumter National Monument. NPS has interpreted the fort as a tour backward in time from its defenses from World War II to the original palmetto log fort constructed by William Moultrie. The preserved Harbor Entrance Control Post and BCN 520 (now a private residence) are the main relics of the World War II era.

Moultrie is honored with his statue in The Battery section of downtown Charleston.

All content from Kiddle encyclopedia articles (including the article images and facts) can be freely used under Attribution-ShareAlike license, unless stated otherwise. Cite this article:
Fort Moultrie Facts for Kids. Kiddle Encyclopedia.