The flag of South Carolina is a symbol of the U.S. state of South Carolina consisting of a blue field with a white palmetto tree and white crescent. Roots of this design have existed in some form since 1775, being based on one of the first Revolutionary War flags. While keeping most of its design intact since its adoption, it has varied over the years. 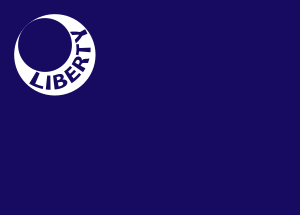 The Moultrie Flag (also known as the "Liberty Flag") 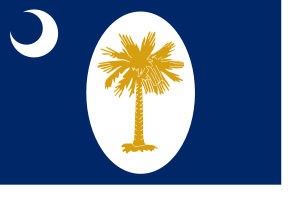 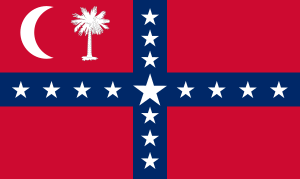 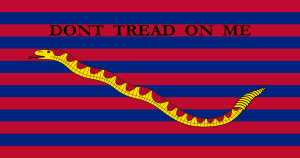 In 1775, Colonel William Moultrie was asked by the Revolutionary Council of Safety to design a flag for the South Carolina troops to use during the American Revolutionary War. Moultrie's design had the blue of the militia's uniforms and the crescent. It was first flown at Fort Johnson. This flag was flown in the defense of a new fortress on Sullivan's Island, when Moultrie faced off against a British fleet that had not lost a battle in a century.

However, there is much debate about the significance of the crescent. In 1775 Colonel William Moultrie was asked by the "Revolutionary Council of Safety" to design a flag for the South Carolina troops. In his memoirs, Colonel Wiliam Moultrie tells us: "A little time after we were in possession of Fort Johnson, it was thought necessary to have a flag for the purpose of signals: (as there was no national or state flag at that time) I was desired by the council of safety to have one made, upon which, as the state troops were clothed in blue, and the fort was garrisoned by the first and second regiments, who wore a silver crescent on the front of their caps; I had a large blue flag made with a crescent in the dexter corner, to be in uniform with the troops ..."In the 16-hour battle on June 28, 1776, the flag was shot down, but Sergeant William Jasper ran out into the open, raising it and rallying the troops until it could be mounted again". This gesture was so heroic, saving Charleston, South Carolina, from conquest for four years, that the flag came to be the symbol of the Revolution, and liberty, in the state and the new nation.

Soon popularly known as either the Liberty Flag or Moultrie Flag, it became the standard of the South Carolinian militia, and was presented in Charleston, by Major General Nathanael Greene, when that city was liberated at the end of the war. Greene described it as having been the first American flag to fly over the South.

The palmetto was added in 1861, also a reference to Moultrie's defense of Sullivan's Island; the fortress he'd constructed had survived largely because the palmettos, laid over sand walls, were able to withstand British cannon.

Following its declaration of secession from the Union, the newly independent state of South Carolina considered many designs for its national flag, and selected an existing unofficial state flag with an upward facing gorget on a blue field, modifying it by adding a palmetto at the center of the field. On January 26, 1861, the South Carolina General Assembly adopted a new flag by adding a golden palmetto encircled with a white background. However, this flag has become known as the "2-day flag" because the golden palmetto was changed on January 28 to a simple white palmetto on the blue background. Less than three months later, a variation of the palmetto flag unfurled over Fort Sumter on April 14, 1861, the day it was surrendered to Confederate General Beauregard, making it likely the first Confederate flag flown over captured United States' territory. The flag consisted of a palmetto on an entirely white background with a red star in the upper left quadrant, and is commonly known as "The Palmetto Guard Flag"

The Sovereignty flag was never recognized as an official flag in South Carolina, but there are also claims that it was flown for a short period of time in South Carolina after its secession on December 20, 1860. Another significant flag is the "South Carolina Secession Flag"; the day after South Carolina seceded a red flag, with two tails, a large white star and an upside down crescent moon at the top by the flag staff was raised over the Charleston Custom House. It then spread to other cities as a symbol of secession. 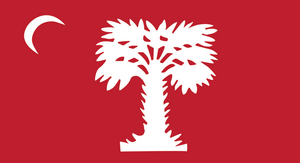 The flag flown by Citadel cadets over Morris Island, South Carolina during the American Civil War

A similar flag was flown by Cadets from The Citadel in 1861 as they manned defenses at Morris Island against Union supply ships. This flag (now known as "Big Red") featured a white palmetto on a red field with a reversed (inward-facing) crescent. After its recovery from storage in an Iowa warehouse, the flag is now flown by the Citadel's Corps of Cadets as their official spirit flag.

All content from Kiddle encyclopedia articles (including the article images and facts) can be freely used under Attribution-ShareAlike license, unless stated otherwise. Cite this article:
Flag of South Carolina Facts for Kids. Kiddle Encyclopedia.