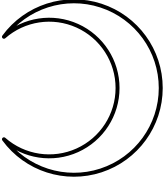 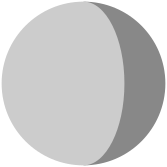 An astronomically correct crescent shape (in blue), complemented by a gibbous shape

In art and symbolism, a crescent is generally the shape produced when a circular disk has a segment of another circle removed from its edge, so that what remains is a shape enclosed by two circular arcs of different diameters which intersect at two points (usually in such a manner that the enclosed shape does not include the center of the original circle).

All content from Kiddle encyclopedia articles (including the article images and facts) can be freely used under Attribution-ShareAlike license, unless stated otherwise. Cite this article:
Crescent Facts for Kids. Kiddle Encyclopedia.