Kids Encyclopedia Facts
This page is about the Greek goddess. For the fantasy novel series, see Artemis Fowl. 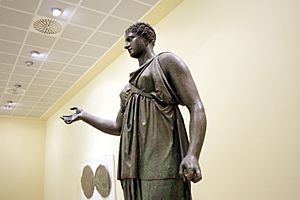 Artemis is a goddess in Greek mythology. She is one of the Twelve Olympians. She is the daughter of Zeus and Leto. She is the twin sister of Apollo.

Artemis is the goddess of hunting, wild animals and the wilderness.

When Artemis was born she became known as the goddess of the moon.

Her symbol is widely known as a bow and arrow.

Her Roman name is Diana.

Hera, who was Zeus's wife, discovered that Leto was pregnant and became very angry. She banned Leto from giving birth on any mainland or island known.

Leto found the island of Delos, which floated and so was not an island or mainland, and gave birth there. Hera then locked up the goddess of childbirth, Eilethyia, so she could not give birth to the twins. Then, all the other goddesses convinced her to let her free so she could finally give birth. Leto gave birth to Artemis without any problem. However she was in labor with Apollo for nine days. Artemis helped Leto to give birth to Apollo.

All content from Kiddle encyclopedia articles (including the article images and facts) can be freely used under Attribution-ShareAlike license, unless stated otherwise. Cite this article:
Artemis Facts for Kids. Kiddle Encyclopedia.