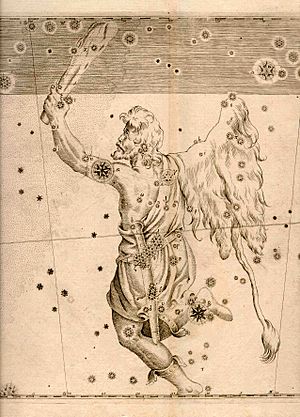 An engraving of Orion from Johann Bayer's Uranometria, 1603 (US Naval Observatory Library)

In Greek mythology, Orion is a giant hunter. When he goes hunting, his dogs Sirius and Procycon accompany him. He lived in Boeotia and Crete. People do not agree about his parents: Sometimes he is said to be the son of Poseidon and the gorgon Euryale, at other times, he is said to have three fathers, Poseidon, Zeus and either Hermes or Ares. All three mixed their perm in a bag of animal hide. Zeus gave him his craving for adventures, from Poseidon, he got the ability to walk on water.

He is married to Side, but Hera cast his wife into the Tartaros, because Side was too proud of her own beauty.

In Greek literature he first appears as a great hunter in Homer's epic the Odyssey, where Odysseus sees his shade in the underworld. The bare bones of his story are told by the Hellenistic and Roman collectors of myths, but there is no literary version of his adventures. Other heroes' stories are told, for example Jason in Apollonius of Rhodes' Argonautica or Euripides' Medea. The entry in Ovid's Fasti for May 11 is a poem on the birth of Orion, but that is one version of a single story. The surviving fragments of legend have provided a fertile field for speculation about Greek prehistory and myth.

Orion served several roles in ancient Greek culture. The story of the adventures of Orion, the hunter, is the one on which we have the most evidence (and even on that not very much); he is also the personification of the constellation of the same name; he was venerated as a hero, in the Greek sense, in the region of Boeotia; and there is one etiological passage which says that Orion was responsible for the present shape of the Straits of Sicily.

All content from Kiddle encyclopedia articles (including the article images and facts) can be freely used under Attribution-ShareAlike license, unless stated otherwise. Cite this article:
Orion (mythology) Facts for Kids. Kiddle Encyclopedia.