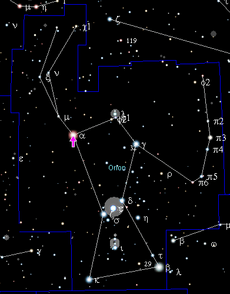 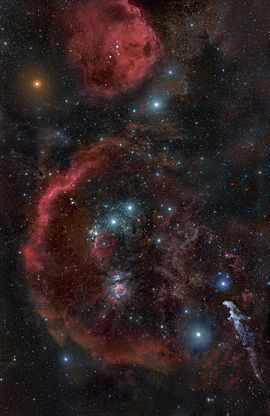 Betelgeuse (from Arabic:إبط الجوزاء Ibṭ al-Jauzā’, meaning "the armpit of Orion") is a large red supergiant star in the Orion constellation. It is usually the ninth-brightest star in the night sky, and the second-brightest in Orion.

Betelgeuse is a semiregular variable star whose apparent magnitude varies between 0.2 and 1.2. This is the widest range of any first-magnitude star.

It is also one of the largest and most luminous observable stars. It has a radius between 950 to 1,000 times wider than the Sun. This means it is 1.322 to 1.392 billion kilometers in diameter. Betelgeuse was the first star other than the Sun whose size was known. The star's distance from Earth is about 640 light-years. Its average absolute magnitude is about −6.02.

Betelgeuse is less than 10 million years old. It evolves rapidly because of its high mass. It is moving through the interstellar medium at a speed of 30 km/s, creating a shock wave over 4 light-years wide.

Betelgeuse is now in a later stage of stellar evolution. It will rapidly go through its life cycle before exploding as a type II supernova sometime in the next million years.

An observation by the Herschel Space Observatory in January 2013 showed that the star's winds are crashing against the surrounding interstellar medium. Betelgeuse is one of the red supergiant stars to have a bow shock: others are Mu Cephei and IRC-10414. Betelgeuse can be seen at the upper left in Orion.

All content from Kiddle encyclopedia articles (including the article images and facts) can be freely used under Attribution-ShareAlike license, unless stated otherwise. Cite this article:
Betelgeuse Facts for Kids. Kiddle Encyclopedia.